Maplewood State Park will celebrate its 50th anniversary this year. “When you compare it to Itasca, we’re kind of a newbie,” says Nagle. “The advantage to that is that there are still people living here who grew up in the park—and some of them are members of the Friends. We have an active history here.” 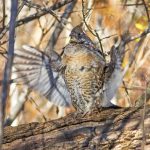 Maplewood State Park is “uniquely perched right on the edge of the western prairies and the maple-basswood forest,” says Don Del Greco, park manager. “it’s a grand mixture of hardwood forest with that prairie element, which makes for a lot of diversity—you can go from deep hollows and then knolls, then step into a colorful prairie, all the same hike.”

Friends of Maplewood State Park has about 100 members, with another 30 on an advisory committee. The group publishes a quarterly newsletter and has helped add to the amenities of the park over the last 15 years. In 2008, the group built the Josh Hanson Memorial Picnic Shelter, in honor of the son of long-time park ranger Bob Hanson, a project that cost $130,000. 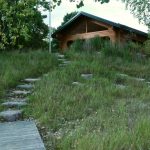 The stunning picnic shelter built by the Friends Group

A more recent accomplishment was putting up six signs locating the park on I-94 at Hwy. 59, to make sure park visitors can find the entrance. “It was incredibly complicated and expensive to do—more than $30,000 for six signs, “says Nagle.

Rep. Bud Nornes helped the group secure foundation support for part of the money. Smaller projects include partnering with Eagle Scouts to build shelters for campers on the horse trails and recycling bins.

“The Friends are a very passionate group of folks with attachments that go way back,” say Del Greco. “they help meet the unique needs of the park.”

Two major events at the park are an important part of the Friends work: Leaf Days in the fall and the spring maple syrup demonstration project. 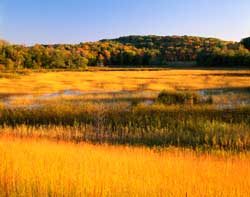 Leaf Days is a two-weekend event on the last weekend of September and the first weekend in October. “Maplewood is known for its color,” Del Greco says. Thousands of people come to see the fall color, from their cars and from the trails. The Friends do a hospitality event with food and other activities during Leaf Days, which is their major fundraising of the year.

More recently, the Friends have been doing a maple syrup demonstration in the spring. Del Greco says that volunteers from the Friends put in hundreds of hours tapping the maples in the park, boiling the sap and cleaning it. The resulting syrup is then taken to the local bottler where it’s finished and bottled with a Friends of the Maplewood State Park label. This year, unusual winter weather meant an unpredictable sap run, but Del Greco says the Friends put out the taps at just the right moment so there was enough sap for four or five boiling demonstrations. With a donation of extra sap from a nearby Friend, the group was able to bottle syrup, which will be for sale during Leaf Days this fall.

Nagle says the Friends group is eager to promote the park. “sometimes local people want to keep their park the way it is; they aren’t interested in sharing it,” he syas. “The attitude of the Friends of Maplewood is absolutely different. We went to a lot of trouble to put up the signs to make sure we can bring the park to other people I really like that wholesome attitude.”

Del Greco has high praise for the group. “They have wonderful vision and they are fantastic support for the park,” he says. They work so well with each other and with us at the park because the park is very important in their lives.”