In southern Minnesota near the city of Mankato, there is a two-tiered waterfall that has long held the public’s admiration for its stunning display. The falls are named Minneopa, which is interpreted from the Dakota language to mean, “water falling twice.” In 1905, shortly after Minnesotans first started taking action to preserve special places for future generations to enjoy, Minneopa was selected to become the third state park.

Yet, another ninety years would pass before a group of concerned park supporters rallied together to form an organization dedicated to its preservation. As is often the case with the formation of Friends Groups, it took the threat of development to spur organized action. For Minneopa, that threat was the National Guard, who had proposed building a firing range along the western border of the park.

When local activist, Brand Frentz got word of the proposed firing range he realized it would take more than just him to preserve the natural sounds in the park. Yet, the response to his outreach efforts surprised even him. “Fifty people showed up for the first meeting,” said Frentz. The ad hoc group stopped the firing range from being developed and then decided they needed an organized group to protect the park for the “next time.” And a Friends Group was born.

When asked if there have been other non-compatible, development threats to the park, Frentz explains, “People know that we are here.” And that simple fact seems to go a long way in preserving this special place.

“One of the first decisions we had to make was how close we wanted to be with management,” said Frentz. “We see each other as partners—we’re separate but provide citizen input.”

Today, the Friends are actively getting the word out about the park. “We have 12,000 college kids in the area and so many of them don’t even know about the park,” says Tim Pulis, secretary of the Friends of Minneopa. To overcome this lack of awareness, the Friends produce a quarterly newsletter, organize quarterly public meetings, and host numerous family-friendly events at the park.

Recently the park added a naturalist position that was funded through the Legacy Amendment. “This has been a tremendous addition to the park—he is now the go-to guy,” explained Pulis. 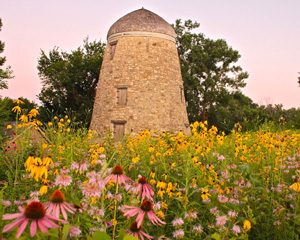 The Friends work closely with the naturalist and offer invaluable volunteer support to make the events happen.

However, like many state parks, Minneopa has a limited number of staff who are in charge of managing its vast and vulnerable resources. “When I first became familiar with the park, I was shocked by how few staff there were,” says Frentz. “But now it’s even worse.” In some ways, the Friends are more important than ever for keeping this special place loved and protected.  When asked if there have been other non-compatible, development threats to the park, Frentz explains, “People know that we are here.” And that simple fact seems to go a long way in preserving this special place.