Debbie Kippen spends a lot of time in Minnesota state parks; she is just one park visit away from having hiked every one. And she says each one is special. In August, Kippen was awarded the first place honor in our photo contest. We chatted with her to learn a bit more about her winning photo in our photo contest. 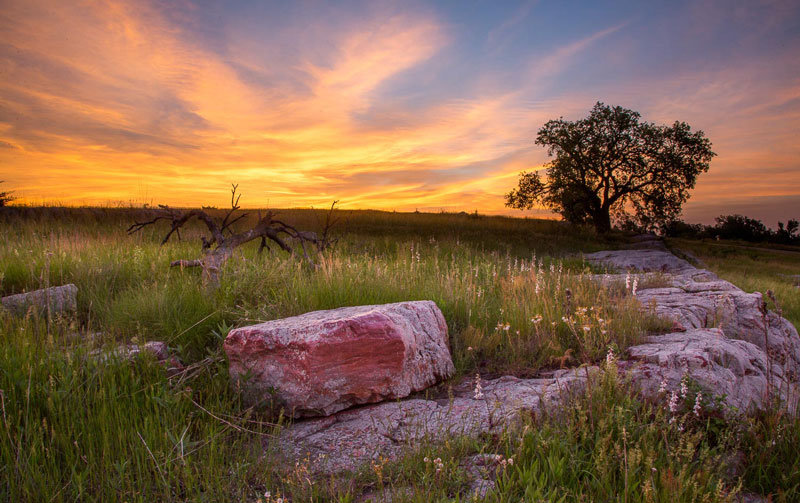 P&TCM: It seems that you visit many state parks—is that true and if so, what is it that draws you to these places?

Debbie Kippen: Quite some time ago, my hubby and I started on mission to camp and/or hike in all of the MN State Parks. And in doing so, we found that no two parks are alike – each one is so different and some more special than others. And after this month, with the exception of Lake Vermilion, we’ll have accomplished that goal.

P&TCM:The photo is taken in Blue Mounds State Park. Is this a place you’ve been to often or a new place for you?

DK: I have been to Blue Mounds several times and for various reasons.  But for this particular photo, I was drawn to this tree based on a picture taken by Jim Brandenburg and by now, I probably have close to 50 different shots taken around this spot.

P&TCM: How would you describe the place in your photo?

DK: Majestic—peaceful, a true test of time. And the tree just seems to come up out of the rocks.  I tried to imagine what it was like during the times when the Indians roamed the prairie.

What were the conditions like when you took this photo?

DK: I hiked up the hill well before sunrise. Then, think dead of summer: hot, humid, sticky along with a bumper crop of mosquitoes. As I walked up the hill, I could hear quite a variety of birds. But as I stopped what I was doing and really listened, I could hear the faint rustle of the wind as it came down the hill and through the prairie.

How would you describe the mood of this photo?

DK: I was hoping for a good sunrise and drama in the sky.  It was just a matter of wait and see and when the sun starting coming up and over the hill—I knew I wasn’t going to be disappointed.

How did you set up the photo?

DK: It was both spontaneous and carefully planning at the same time.  Since I had been to this spot several times before, I wanted something different.  And I probably took about 15-20 shots at different angles that morning and this turned out to the best of the group.

Do you have any tips for other outdoor photographers?

DK: Just get out there—it may take several trips to get that one shot.  And be prepared—for anything.  Don’t let obstacles get in your way, look for a spot that 50 other photographers haven’t taken—yes it’s hard these days, but if you look hard enough, you’ll find your own special spot.

See the 2016 Photo Contest Gallery
Sign Up for E-News