After laying fallow last winter, cross-country ski trails are once again being groomed and welcoming skiers at Hayes Lakes, Lake Bronson, McCarthy Beach and Zipple Bay State Park in northern Minnesota, thanks to a partnership between Parks & Trails Council of Minnesota (P&TC) and the DNR.

Many people are taking advantage of opened ski trails. A couple of the parks have hosted several well-attended candlelight ski/snowshoe events this season. 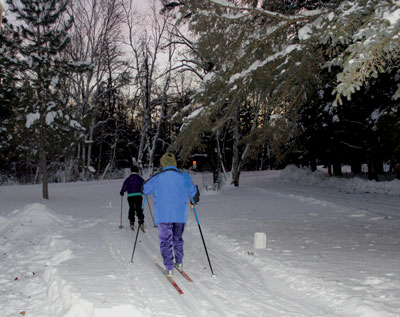 “We’re happy to partner with the park to ensure this important winter activity remains available,” says P&TC’s executive director Brett Feldman. The grooming partnership is similar to how some cross-country ski trails are groomed outside of state parks using the state’s grant-in-aid program. The difference is that P&TC and the volunteers receive no compensation for the grooming.

In previous years, these trails were maintained by the DNR, but as the department continued to implement its new strategic plan, the decision was made to stop grooming at several state parks in 2015.

Some Friends Group members were hopeful they could find another way to continue trail grooming. P&TC began working with the Friends Groups and the MnDNR to formalize a partnership. “We believe in the power of volunteers to enhance state parks, so when we saw that we could play the critical role in facilitating volunteers to perform this service we jumped at the opportunity,” said Feldman.

Grooming the nine miles of trail at Zipple Bay State Park takes volunteer Tom Heinrich anywhere from two to six hours, depending on snow conditions. Deeper snow requires a couple passes to pack down properly. “I enjoy doing it; it gives me the opportunity to feel like I’m accomplishing something for the community,” Heinrich says. Without this partnership to groom trails at these three northwestern Minnesota State Parks, the closest place to offer groomed trails is two hours away in Bemidji.

Heinrich knows of about 25 to 30 people who regularly ski at Zipple Bay State Park. In addition to this core group of local skiers, the park is visited by travelers who come from miles away. In fact, on Dec. 28, as Heinrich finished grooming the trails for the first time this season, the park staff greeted a couple who had just traveled two hours by car for the sole purpose of cross-country skiing in the park. Needless to say, they were happy to have trails open and groomed. 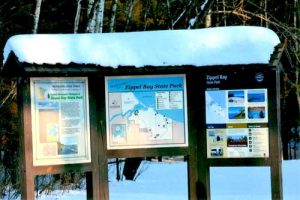 As the MnDNR has begun refocusing their services to high-use times and places, P&TC expects that this could become an important service for the nonprofit to provide. “We understand the MnDNR needs to think strategically about where they spend their resources; that’s why, when we can, we’re happy to partner with both the MnDNR and local volunteers to provide those services that the local community wants but that don’t necessarily fit into the MnDNR plans and can’t be done by the Friends Groups alone,” Feldman said.

P&TC works with Friends Groups across Minnesota in various other ways from assistance in forming, to hosting advocacy workshops, providing insurance for special events and acting as the fiscal sponsors for groups.