Legislative Briefing for May 7-11

With just over a week left until adjournment, lawmakers are racing to complete a long list of legislative priorities, including a tax bill, a bonding bill, a supplemental budget, and numerous policy changes. A number of key pieces of legislation affecting parks and trails continue to move through the legislative process, including a policy bill that threatens to open up state parks to all-terrain vehicles (ATVs) and a set of bonding bills that could fund a variety of park and trail projects across the state.

The House’s Omnibus Budget Bill (HF 4099) contains a controversial provision that allows ATVs to use the campground and access routes in Hayes Lake State Park. Critically, the Senate’s Omnibus Budget Bill (SF 3656) does not contain the provision. A conference committee was formed this week to reconcile the many differences between the two bills (click here for a side-by-side comparison of the environmental provisions), and we’re working hard to ensure the final bill does not include the House’s ATVs in state parks language. We’ve been following this issue all session, and sent a letter to the conferees outlining our concerns. The DNR has also penned a letter stating their opposition

Click here to tell Sen. Rosen, the Senate Chair on the conference committee, that you support the Senate bill and to reject the House’s controversial ATVs in state parks provision.

We also encourage you to email the other senators on the committee and offer support for the Senate position. Your message should thank them for not including the controversial provision in the Senate bill, and reiterate that Minnesota State Parks are not the place for ATV recreation under any circumstances. Allowing ATVs in state parks is contrary to the state park mission as defined by the Outdoor Recreation Act, is opposed by state park visitors, and would create numerous safety and natural resource challenges for park managers.

We also ask that you reach out and thank the lawmakers who have steadfastly opposed this legislation from the start. Gov. Dayton has opposed the proposal since its first committee hearing, and this week in the conference committee Sen. Ruud once again testified to all the reasons allowing ATVs in state parks is such a bad idea.

Following the release of the House bonding bill last week (HF 4404), the Senate released their bonding proposal Wednesday afternoon (SF 4013). While both the House and Senate propose $825 million in public works projects – significantly less than the governor’s $1.5 billion proposal earlier this year – we’re pleased that the Senate proposal includes significantly more funding for parks and trails than the House proposal. The Senate’s bill includes funding for all the state park and trail projects included in the House bill, plus additional funding for Lake Vermilion/Soudan Underground State Park, Chester Woods State Trail, Mill Towns State Trail, Shooting Star State Trail, and the Wagon Wheel State Trail. A complete comparison of the projects included in the House and Senate bonding proposals is included below.

While we are very pleased with the projects currently included in the bonding proposals, we also are disappointed that many important and long-waiting projects remain unfunded (see here for the full list of projects we’ve been advocating for). If you haven’t already, it’s not too late to reach out to your local legislators, plus Rep. Urdahl (chair of the House Capital Investment Committee) and Sen. Senjem (Chair of the Senate Capital Investment Committee) to thank them for the projects included in their bills and to ask that additional projects be funded as the bonding bills move through the legislative process.

Both the House and Senate bills are expected to move forward in the coming days, and will likely be assigned to a conference committee next week. 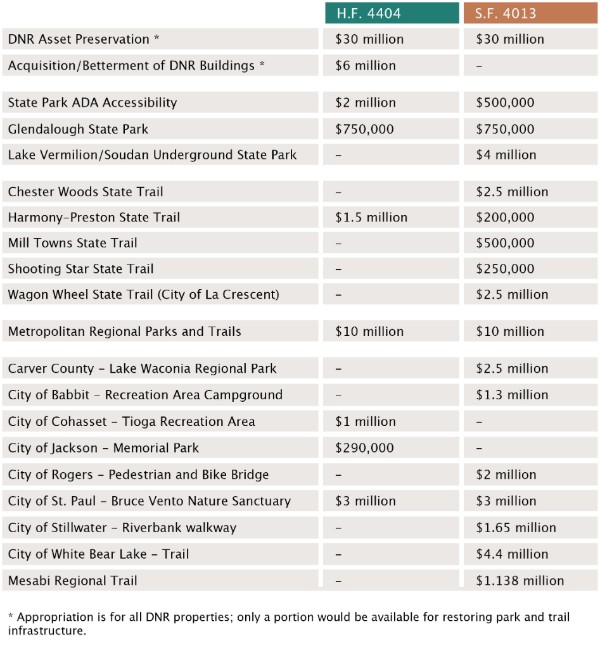