In the early 1990s, the Albany Jaycees, a civic-minded organization, saw the abandoned railroad line running through their town and saw potential to transform it into a trail. Their vision turned into action as they embarked on a multi-year campaign that culminated the grand opening of the Lake Wobegon Trail in 1998.

Twenty-one years later, volunteers with the Lake Wobegon Trails Association remain vital to the trail’s success. They promote and enhance the trail while also supporting area communities and businesses. The trail is owned and maintained by Stearns County, and the volunteers provide the extra touches that give the trail a welcoming feel. 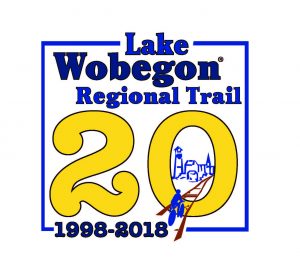 Each year, they sponsor and organize three fundraiser rides: the Caramel Roll and Ladyslipper Rides in June and the Caramel Apple Ride in September. Beginning last year, we also partnered with the Central Lakes Trail Association to put on the Rail Trails 100, a century ride which uses both trails.

Additionally, they choose a project to work on each year that will enhance the trail for users. In 2017, they began working with local Lions Clubs, cities, and individuals to raise enough money to outfit each trailhead with a bike repair station and pump. Because of the scope of the project, they expect to install the last of 8 stations in 2019.

Currently, they are working on establishing a “Friends of the Trail” program to raise more awareness of the group and its activities. They continue to advocate for support of the trail locally, at the state level, and nationally.