“Milkweed and Monarchs” and other news at Glendalough

Hikers and bikers observed two resurgences along the Glendalough trails in the summer of 2019 – milkweed and monarch butterflies. The interdependence of these two prairie natives cannot be overstated. 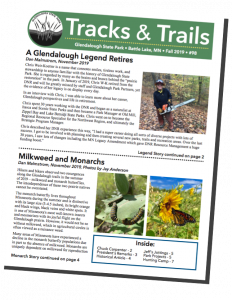 The monarch butterfly lives throughout Minnesota during the summer and is distinctive with its large size (3-4.5 inches), its bright orange and black wings, black veins and white spots. It is one of Minnesota’s most well-known insects and mesmerizes with its joyful flight on the Glendalough prairie. However, it would not be so without milkweed, which in agricultural circles is often viewed as a nuisance weed.

Many areas of Minnesota have experienced a decline in the monarch butterfly populations due in part to the absence of milkweed. Monarchs are uniquely dependent on milkweed for reproduction and sustenance in parks and fields where these native plants are common.

According to information on the DNR website, each year Minnesota monarchs that have wintered in Mexico will migrate north laying eggs on milkweed plants there or in southern states. Then the adult dies. Monarchs develop first as an egg, continue to grow as a caterpillar, and finally emerge as a butterfly. Growing from an egg to a butterfly takes about one month. One month later, the young butterflies head to Minnesota. The process repeats itself. Critical fact; monarch larvae eat only milkweed.

During the summer of 2019, stands of milkweed in the park were exceptional and the monarch population followed suit. One particularly dense concentration of milkweed and monarchs could be found along the bike trail on the east side of Molly Stark Lake near the low habitat area. Hikers and bikers often stopped along the trail to watch as the prairie seem to lift in flight given the high numbers of monarchs.

The Jay Anderson family of Battle Lake – frequent users of the bike trail – enjoyed the monarch presence in Glendalough and captured some outstanding photography.

Each fall, tens of millions of monarchs, including those from Minnesota, migrate to their wintering grounds west of Mexico City. Researchers believe as many as 50 million Monarchs migrate south each fall. The migration generates considerable public interest. In our area, it is not uncommon for DNR Naturalists and conservation groups across Otter Tail County to invite students and the public to “catch and tag Monarchs” to observe their migration patterns and wintering locations. Park Manager Jeff Wiersma often reports on this popular park activity in his reports.

Let’s hope the resurgence continues as another benefit of a restored and healthy Glendalough prairie.