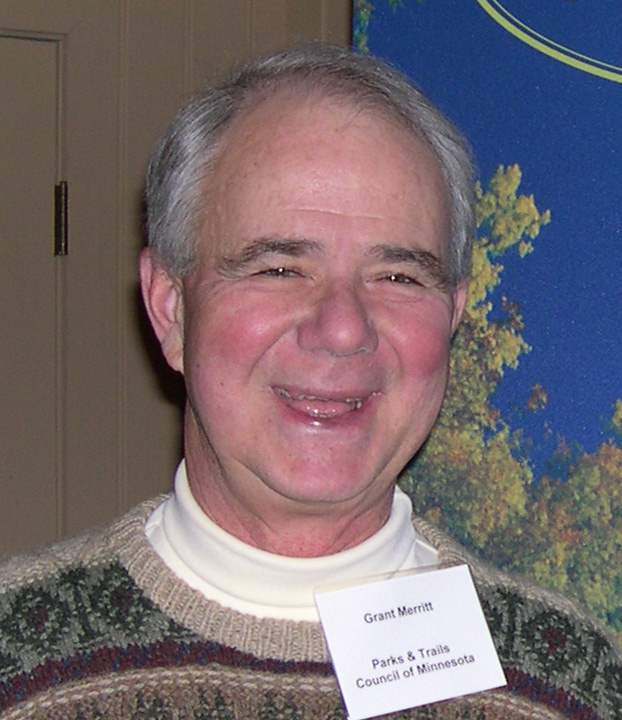 Past president of Parks & Trails Council and beloved member of the parks and trails community.

The family invites the public to a

It is with a sad heart that we share that a beloved member of our community has passed away. Grant Merritt served on Parks & Trails Council’s board of directors for 11 years, including as president from 2004-2006. His commitment to the organization remained steadfast as he continued to serve on P&TC committees through this year. Grant’s lifetime of hard work, innovation and results on behalf of the Great Outdoors earned him Parks & Trails Council’s prestigious Reuel Harmon Award in 2018.

Grant gained notoriety as one of Minnesota’s most tenacious and courageous environmental leaders during his tenure as head of the Minnesota Pollution Control Agency (MPCA) for his role in the Reserve Mining case. The long drawn out legal battle resulted in the company being found liable for serious environmental and health threats on the shores of Lake Superior and ordered to be shut down.

In addition to serving as head of the MPCA from 1971-1975, Grant also served on the first board of the Minnesota Environmental Quality Council and was Minnesota’s representative on the Great Lakes Water Quality Board. He was an attorney in the areas of environmental law, transportation and government relations for more than 50 years. His complete life story is captured in his memoir, “Iron and Water: My Life Protecting Minnesota’s Environment.”

You can also find some of Grant’s life achievements chronicled at our Reuel Harmon Hall of Honor webpage, from when he received the award in 2018.

Grant is survived by his wife of 64 years Marilyn, and his two daughters Linda and Carolyn. He was preceded in death by his son Steve.