A senator who stands strong for parks and trails

Sen. Carrie Ruud stood up for the environment as a “common-sense conservative” even as many of her fellow Republicans didn’t support that priority. Last spring, she found herself competing against incumbent Republican Senator Justin Eichorn for her newly redrawn redistrict. She did not get the endorsement, prompting her to wrap up a decade of leadership in the Minnesota Senate. Yet, she remains remarkably upbeat and appreciative of the opportunity to leave a legacy for parks and trails. 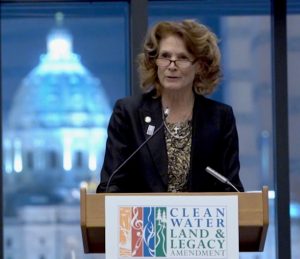 Ruud will be presented with the Reuel Harmon Award at the Parks & Trails Council’s Annual Dinner on September 28 at Como Lakeside Pavilion in St. Paul.

Ruud had influence over all bills relating to Minnesota’s environment in her roles on the Senate Environment and Natural Resources Policy and Finance Committee, where she served as Assistant Minority Leader and Chair. She stood in solid opposition to well-resourced advocates who pushed to open up state parks to off-highway vehicles (OHVs). “We can’t allow that,” she says. “Once we do, the precedent is set, and quiet spaces are lost.”

For her, preserving quiet spaces is important. Part of the reason is veterans, who are “great consumers of parks and trails, and who look to these places for solace.” She also believes parks and trails should be accessible to everyone. “We’ve done great things to help differently-abled folks use the parks and that needs to continue,” she says.

Ruud’s love of the outdoors was instilled by her father. Growing up in the Twin Cities she says she didn’t have much, but she has fond memories of visiting local parks. “Then one year, we got camping equipment and we were unleashed,” she says. “We started going around the state to places like Gooseberry Falls and Itasca.”

As an adult, she has inline skated on most of Minnesota’s state trails and is always looking for new lakes to kayak. This year, she competed at the Snowshoe Racing World Cup in Argentina, adding that she hopes to bring this event to Cuyuna Country State Recreation Area (SRA) soon. 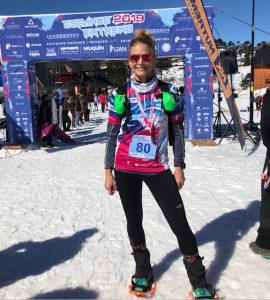 Cuyuna SRA is a special place to Ruud. For her, it epitomizes the power of boosting tourism through outdoors investments. In 2001, when Ruud was mayor of Breezy Point, Cuyuna SRA was just being developed near the sleepy town of Crosby. Today, it is a world-class mountain-biking destination and Crosby has a bustling downtown. “Seeing this place come to fruition has been one of my greatest accomplishments,” she says.

Overall, parks and trails were a priority during her tenure. In 2015 she supported a 20 percent increase in state parks and trails funding. In 2021, bolstered by Parks & Trails Council’s research, she authored a $4.8 million Trails Rehab Bill. “It’s been a great partnership with Parks & Trails Council,” said Ruud. “Anytime I needed information or support, they were there.”

She is particularly proud of her work on the Legacy Amendment, as well as the Environment and Natural Resources Trust Fund. “I hope I put in good guardrails there,” she says, alluding to recent attempts by others to raid the fund to non-environmental needs.

Ruud says she could not have done her job without the support of the environmental community. She laughs as she adds, “I know because sometimes it would feel like I was out on a springboard all by myself, if not for that community’s support.”