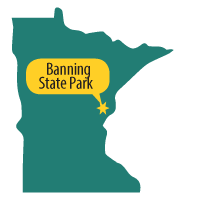 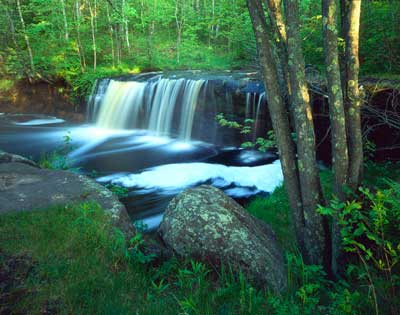 Wolf Creek Fall by Gary Alan Nelson - a trail on the land we helped acquire leads to these quaint falls.

The wild and scenic Kettle River runs through Banning with its multi-faceted beauty. It’s like a Jekyll and Hyde river that changes from dramatic sheer-cliffs along roiling rapids to grassy shorelines along gently meandering waters. The trails follow the river and traverse the boulder-strewn landscape covered in a mixture of pine trees and aspens and maples. It’s a wonderland with many nooks and crannies created by the boulders.

In the late 1800s, Banning became famous as a sandstone quarry. That didn’t last long though as steel became the material of choice by the early 1900s, prompting the quarry to close. This was shortly after the great Hinckley forest fire of 1894 that swept through the area. The area became a park in 1963 and today, visitors can see remains of the old quarry along a self-guided interpretive trail.