Our Magney Circle members demonstrate a strong commitment to Minnesota’s magnificent natural areas with annual support of $500 or more. 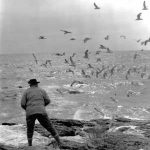 The Magney Circle is named in honor of one of our founders, Judge Magney.

Born the son of humble parents, Magney grew to have a distinguished career as a judge with a passion for ensuring nature’s beauty be preserved for everyone.

His advocacy first took shape in 1917 when elected mayor of Duluth when he promptly acted to expand the city’s park system to 6,000 acres and double the size of Jay Cooke State Park.

Later, in his “spare time” he created the stunning array of parks along the North Shore. He did this through sheer determination and aided by his extensive knowledge of the law. He rolled up his sleeves and began securing options, preparing plans, and drawing up legislative bills which he then presented in face-to-face meetings with members of the Minnesota Legislature, trying to convince them of the importance of protecting this land for everyone.

Judge Magney understood that Minnesota’s most magnificent natural areas should be appreciated and accessible to all people, not just those who could afford to acquire them. As he put it, “Our state parks are every person’s country estate.”

A story of dedication
~ excerpt from “Our Citizens and State Parks” by Samuel H. Morgan