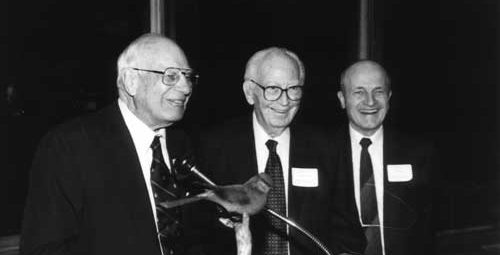 Elmer Anderson, a state senator from St. Paul had been elected governor in 1960. He came to Minnesota from his boyhood home in Muskegon, Michigan. Raised in relative poverty by a divorced mother, Elmer loved to roam the shores of Lake Michigan, collecting nature specimens.

At age 13, he started writing a newspaper column he called “Birds of Muskegon” which grew into “Birds of Michigan.” Andersen grew up to run HB Fuller and to become a state senator. He was asked by Al Marshall, Commissioner George Selke and Judge Hella to carry the bill to create Frontenac State Park on the site of the last French furtrading post on the Mississippi.

Andersen ran for Governor in 1960 and, like all progressive Republicans, fell in love with northern Minnesota, its people and the prospect of winning statewide by cutting into the DFL vote “on the range.” This led to a chance meeting with Theodore Wirth’s son Conrad, who directed the National Park Service. Wirth planted in Andersen’s mind the notion of a Voyageurs’ National Park.

Andersen was a visionary who early in his term appointed a high-powered Minnesota Natural Resources Council chaired by businessman (and state senator) Henry McKnight. In 1962, the Council offered bold, far-reaching recommendations for investing in our natural resource infrastructure: wetlands, fisheries, wildlife, parks, trails and open space.