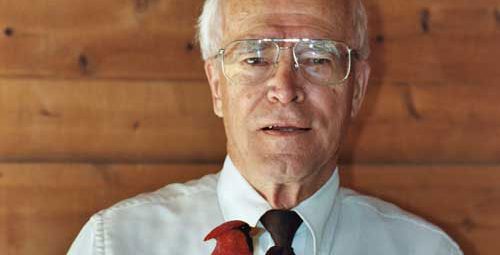 When he was just a boy, Rollie Bishop’s father instilled in him a great love and reverence for Itasca State Park’s awesome natural beauty. Since then he has worked tirelessly for its good stewardship as a committed volunteer and benefactor. As a long-time board member and honorary director of the Parks & Trails Council, Rollie has been instrumental in the development of a superb Minnesota park system for most of his life.

Born in Clarrisa, Minnesota in 1922 Rollis Bishop moved to Park Rapids when his father opened Bishop’s Department Store in 1928. Today, he still lives in Park Rapids and for over fifty productive years, Rollie has contributed greatly to this northwestern region and its natural environment.

In the midst of WWII, he worked as a mechanical engineer with a team charged with resolving fuel pump problems for P-38’s planes used in the European theatre. Always creative and razor sharp, Rollis and his team discovered the nature of the problem and resolved it by fashioning a seal from the felt of a co-worker’s hat! He returned to Park Rapids in 1955 to help his father run Bishop’s Department Store and continued this life work until his retirement in 2001.

Dedicated to Itasca State Park from the beginning, in the 1930’s his family would often picnic in the popular “Preacher’s Grove”; as a Boy Scout, he camped and hiked throughout the park, and later on, he watched the CCC building projects add wonderful rustic log structures to the Park’s landscape.

As a Park Rapids business and community leaders, Rollie and his father actively promoted the unique economic, social and environmental benefits of the park to the surrounding business community, citizens and elected State officials. Rollie’s active interest in protecting the environment and influence in promoting the value of Itasca State Park as the” crown jewel” of Minnesota’s state park system continues today.

Early on, he recognized the fundamental value of involving a wide base of park supporters for the benefit of Itasca Park and worked to create this advocacy and support.  In the late 1980’s, with a group of volunteers, Rollie created Citizens Supporting Itasca Park, a nonprofit membership organization. Under his leadership this group effectively supported the needs of the Park and advocated for funding both locally and at the State capitol.  In 1997, this group merged with the pre-existing Advisory Board to form the Friends of Itasca Park—one of the most effective Friends Groups in the state. Today, both this group and Itasca State Park bear the imprint of Rollie Bishop’s low-keyed persuasion, smart fundraising abilities, good fiscal management and superb leadership.

Like Reuel Harmon and Sam Morgan before him, Rollie Bishop’s life passion has been instrumental in making Itasca and Minnesota’s state parks some of America’s most special places. His commitment and generosity serve as a wonderful example to all who have worked with him and known him as a great friend.

The Minnesota Historical Society recorded numerous interviews with people knowledgable about the history of Itasca State Park, including an interview with Rollis in 2000. Rollis tells his memories of the park in the 1920s and 1930s; early advisory board meetings; ski trails vs. snowmobile trails controversy; improvements in park over the years; changes in the advisory board and DNR relationship over the time; relationship between the board (later Friends of Itasca) and politicians; changes in wildlife; relationship of the park to area businesses; comments on Bert’s cabins; CCC camp buildings; forest rehabilitation; role of state park trail council; comments on current manager.