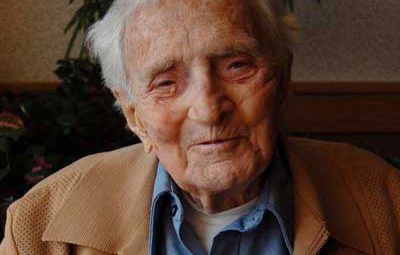 Born in New Ulm, Minnesota on August 12, 1909, Henry N. Somsen followed in his father’s footsteps and became a lawyer, receiving his law degree from the University of Minnesota in 1934. Somsen joined the Minnesota Council of Parks in 1956 after being recruited by its founder, the Honorable Judge Clarence R. Magney. Somsen and Reuel D. Harmon, this award’s namesake, were two of the seven founding members of the Minnesota Parks Foundation in 1967. The two organizations later merged to form what is now the Parks & Trails Council of Minnesota.

“The Parks & Trails Council has had the great fortune of being guided by some of Minnesota’s greatest park and trail champions, and Henry is certainly one of them,” said Parks & Trails Council Executive Director Dorian Grilley. “Henry was absolutely instrumental in the creation of Afton State Park, and for the past 50 years he has risen to the occasion to help with everything from acquiring critical land to restoring wetlands and building wildlife observation blinds. He has built a legacy that will benefit countless generations of Minnesotans to come.”

“We found that if we were going to build parks and trails we had to have the means of not letting opportunities to buy critical pieces of land for public parks slip away from us,” Somsen said. “We knew that if a developer stood on the same hill where our group stood before we bought Afton and saw that wonderful property with that marvelous view, he could have put a golf course in there with homes all around it and made millions. We decided that we had to have a foundation with enough financial resources to hold down a piece of land worthy of being a state park until the Legislature had time to approve the purchase. We held on to that land at Afton for a number of years before transferring ownership to the people of Minnesota. These things take time.”

Somsen loves the outdoors – especially hunting and fishing – and takes great pride in his respect for the environment. While working as a partner in the law firm of Somsen, Schade & Franta, PLC, from 1934 to 1986, Somsen was a board member of many nonprofit organizations. Somsen founded the New Ulm Area Foundation in 1987 to create a permanent vehicle to serve the ever-evolving needs of the New Ulm area. Somsen married his wife Anne in 1936. They later had two children, Pennell and Stephen.