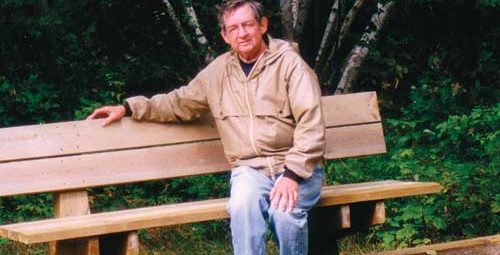 Minnesota’s parks, trails and other wild outdoor places are a part of our state’s Great Outdoor heritage, thanks to the work of dedicated organizations and individuals, people like “Mr. Paul Bunyan Trail,” Terry McGaughey of Brainerd.

Tonight, we honor McGaughey, who has spent more than 25 years working to make the 110-mile Paul Bunyan State Trail a reality, with the prestigious Reuel Harmon Award, the Parks & Trails Council of Minnesota’s highest honor.

“The preservation and establishment of parks and trails in Minnesota depends on those who are willing to step forward and do the hard work,” says Parks & Trails Council Acting Executive Director Brett Feldman. “Terry McGaughey has been a tireless advocate for the Paul Bunyan Trail and for outdoor recreation of all kinds.”

“I’ve been a member of the Parks & Trails Council for many years and have always watched with great respect those selected for the Reuel Harmon Award,” says McGaughey. “I never imagined myself receiving it.”

McGaughey has been a citizen activist and lobbyist at the Minnesota Legislature since the early 1960s. He became involved in the project that gave him his nickname in 1983.

“When an abandoned railroad grade of 110 miles was discussed, I thought, ‘What would be the best use of this?’” he says. He began researching the idea of converting the railbed to a recreational trail and then started working with local chambers or commerce and other organizations to develop support for a recreational trail. He took a slide presentation about the potential of a trail to the 16 communities along the railbed, slowly winning support for the idea.

The Minnesota Legislature authorized the creation of the Paul Bunyan Trail in 1988. In 1992, the first 50 miles of the trail were opened. Today the trail, which runs from Crow Wing State Park to Lake Bemidji State Park, has only a few sections still to be completed. When completed, the Paul Bunyan State Trail and the Blue Ox Trail will be connected to form a 210-mile trail, one of the longest rail-to-trail conversions in the United States.

McGaughey continues to administer the Paul Bunyan Trail Association, which promotes the Paul Bunyan Trail and the surrounding region. He consults with local communities to develop connecting trail routes, and envisions a future for Minnesota in which the concerted efforts of trail supporters will result in a statewide network of recreational trails that will enhance the vitality and livelihood of people and communities.

McGaughey also helped establish the Minnesota Designated Canoe and Boating Routes, helped form the Minnesota Canoe Association, co-founded an Audubon chapter and was a member of the original governing board of Deep Portage Conservation Reserve in Cass County, Minnesota. He was the 2008 winner of the Parks & Trails Council’s Government/Citizen Action Award.

McGaughey has two adult daughters, who grew up biking the Heartland Trail, the first paved state trail in Minnesota.

On June 6, for the 14th year, McGaughey will be part of the annual Ride with Jim, an informal 28-mile bicycle ride on the Paul Bunyan Trail lead by Congressman Jim Oberstar. Anyone who wants to can join Mr. Paul Bunyan for the ride on the trail he helped create.