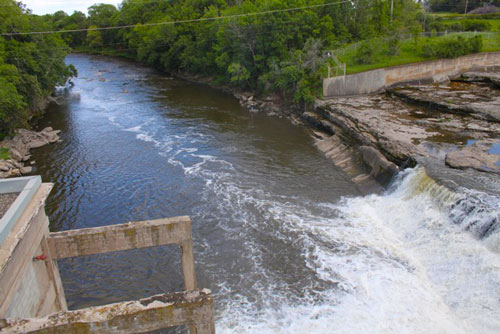 View in 2012 of the Cannon River where the Mill Towns State Trail bridge is now built near the Lake Byllesby Dam.

On December 18, a critical decision was made during a Goodhue County Commissioner’s meeting that sealed the deal for an iconic addition to our state trail system. The decision was followed by a celebration among supporters of the Mill Towns State Trail, who until then were fearful that a good year’s worth of collaboration might come undone.

The project entails a key parcel of land where three miles of the Mill Towns State Trail will run. This section of the trail is located along the scenic Cannon River and will offer a connection between two regional parks via a pedestrian bridge over the river and then connect to the popular Cannon Valley Trail. The Parks & Trails Council has been working with partners to ensure this critical land could be acquired for the trail.
While this trail segment only encompasses about three miles, multiple landowners and jurisdictions were involved, leading to both a complicated process and the potential for synergistic partnerships.

Prior to the Dec. 18 Commissioner’s meeting, multiple partners had set aside funds to acquire parts of the necessary land, including the City of Cannon Falls, the City of Red Wing, the Cannon Valley Trail, Friends of Mill Towns State Trail, the Federal Government, and Parks & Trails Council of Minnesota. However, many of those efforts relied on Goodhue County approving the purchase of a parcel of land.

“This project highlights the magic that can happen when the three park systems in our state work together,” says Brett Feldman, Parks & Trails Council executive director, referring to the Minnesota Department of Natural Resources, Dakota County Parks and Open Space, and Goodhue County Parks. “This project brought so many partners together, and in the end, this trail will benefit and serve more people and communities because of it.”

Part of what made this parcel so critical to the trail development was its role in enabling the construction of an iconic pedestrian bridge over the Lake Byllesby Dam (on the Cannon River). With this land, the bridge design can be optimized and construction deadline stays on schedule to receive the $1.7 million matching grant from the federal government.

The Mill Towns State Trail was legislatively authorized in 2000 as a 25-mile trail starting in Cannon Falls, MN (at the Cannon Valley Trail) and ending in Faribault, MN (at the Sakatah Singing Hill State Trail). A master plan was developed by the Minnesota Department of Natural Resources in 2005. Currently four miles of trail are developed, consisting of city-operated sections in Northfield, MN and Faribault, MN.