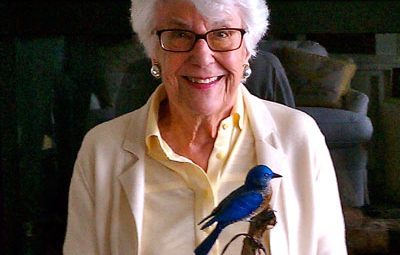 The word “legacy” comes up a lot when Mary Lee Dayton talks about what’s important to her and her family. She and her late husband, Wallace Dayton, have been generous supporters of a variety of organizations, with those dedicated to the environment at the top of the list.

That focus on natural lands comes both from Dayton’s own upbringing and enjoyment of outdoor activities and as a way to honor her husband.

Dayton grew up in Missouri, the daughter of a Presbyterian minister. “They had beautiful park systems down there,” she said. “I learned early on how important it was for people and their recreation and their enjoyment of life and feeling good about themselves. You get on a bicycle and you go down a path, or you just walk, where it’s beautiful around the trees and the flowers. How can you not feel wonderful?”

She came to Minnesota in 1941. “It was a different land, of course,” she said. “And we had winter here, by gosh. That was a wonderful experience, to find all that snow.” The family cabin on Lake Vermilion was an important place for Mary Lee, Wallace and their four daughters. “There’s a lot of open space, a lot of hiking trails. My husband loved that, just to walk out there. Our daughters still go up and love it.”

The family took an important trip to Alaska in 1968, when the youngest daughter was about to leave for college. It was intended to be one last trip while the family was together, but it ended up with even greater meaning. During that trip, Wallace Dayton, one of the early founders of the organizations that became the Parks & Trails Council of Minnesota, decided to retire from business (he and his four brothers had inherited the Dayton’s department store operations) to devote himself to conservation activities. “It was a very exciting time for our family and we all learned a lot, becoming birders and enjoying all the parks and trails in northern Minnesota,” Mary Lee Dayton said. “I have carried on that tradition of conservancy, not only to honor Wally, but because I, too, love the outdoors, experiencing it, observing and participating. I believe that these experiences won’t be available without protecting and conserving them for future generations.”

Wallace and Mary Lee Dayton created the WM Foundation shortly before Wallace Dayton died in October 2002. “The WM Foundation was established by Wally and I as an avenue to give, and recently I’ve incorporated my daughters into this foundation,” Mary Lee Dayton said. “I am so proud of all my girls and the enthusiasm they have developed for some of the same things that Wally and I cherished. I hope that they will continue the tradition of conservation with their own children.”

Although Mary Lee Dayton references her husband’s interests often, and honoring them is an important part of her philanthropy, it’s clear that she, too, has an abiding interest in the outdoors and in creating opportunities for future generations to enjoy them as she and her family have.

Through the WM Foundation’s generous support, Mary Lee Dayton has enabled Parks & Trails Council to, among other things, preserve the peninsula at Crow Wing State Park, where the Crow Wing and Mississippi rivers come together. The peninsula was slated to be developed with private housing. “That means a lot,” she said, “because we are giving people opportunities they wouldn’t have had otherwise.”

Although Wallace and Mary Lee Dayton have been major supporters of the Parks & Trails Council, she often pushes aside the “thank yous” from the organization. “You people are out there doing the work,” she said. “I should thank you. I do thank you.”

Mary Lee Dayton is grateful to have had the financial means to support conservation, the environment, parks and trails and other things important to her. But she urges everyone to get involved in some way, starting by simply opening themselves to the outdoors.

“I believe it starts with familiarizing yourself with what is right outside your front door,” she said. “Get out and enjoy it. If you start there, you can’t help but want to do more. It takes an entire body of people to make our state parks what they are, and it will continue to require that people realize it doesn’t just happen. If it means something to you, you have to find a way to get involved.”