Persistence in fulfilling the vision for a trail in southwestern Minnesota

The very first state trail authorized in Minnesota is a rather modest trail situated amongst the rural prairie lands of southwest Minnesota. Here, in 1967, the innovative idea of creating the state’s first long-distance trail for hiking, biking and horseback riding seemed only logical when locals were wondering what to do with a corridor of state-owned abandoned railroad right-of-way. That year, they received the necessary authorization from the legislature to begin work on building the Casey Jones State Trail. 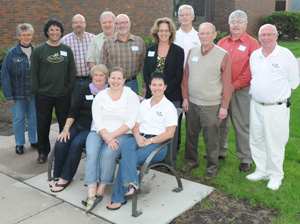 Members of the Friends of Casey Jones

Fast forward 46 years and you may be surprised to see that only 11 miles of the 110-mile trail corridor for the Casey Jones is paved and another 9.5 miles is natural surfaced. “You could look at it as not much done over 40 years, or you could look at it as a lifetime’s work,” explained Bruce Johnson, a board member for the Friends of Casey Jones Trail. The trail has been part of an ongoing conversation within the community for over four decades, yet it was more recently that an organized effort got underway to complete the trail. The Friends of the Casey Jones formed in 2002 and has been dedicated to transforming this innovative idea for a trail into a reality.

“Bob was the guy who hung in there and reminded people that this was worth doing. He was a historian and activist and someone who knows just about everyone involved in the trail.”

The group evolved from grassroots discussions that emerged in support of bike trails in 1999. As these discussions grew, locals rallied together and in 2001 they began meeting with state legislators in hopes of extending the Casey Jones State Trail’s authorization for another 30 miles into Split Rock Creek State Park. They were successful and a Friends Group was born. Since then the group has overseen the development of a master plan, the first paving of the trail in 2008, and another authorization to extend the trail into Blue Mounds State Park in 2010.

“We have tremendous dedication by our members,” says Johnson. “We’re always getting some part done, which motivates us to keep going.”  They recently worked with the DNR staff to put in bridges along the abandoned railroad line in preparation for when the trail reaches the crossing. Staff members from the DNR bring important energy to the group. “These [DNR staff] are the people out there meeting with land owners about acquiring easements or buying property,” says Johnson.

There have also been visionary citizens volunteering with this group over the years. Johnson points to Bob Klingle as one person in particular who really championed the trail and kept the Friends Group together during the less active times. “Bob was the guy who hung in there and reminded people that this was worth doing. He was a historian and activist and someone who knows just about everyone involved in the trail.” Volunteer-based groups like this often are bolstered by the passion and dedication of a community leader who paints a vision for the group.

Today, the group’s vision is to create “a greenway connecting people to the history and nature of the wind-swept places of the prairie.” Connections are a critical element in describing the trail. When completed, the trail will connect three state parks (Blue Mounds, Split Rock Creek and Lake Shetek), one national monument (Pipestone), and two regional parks to the quaint tourist towns in the region.

The Friends Groups sees the potential for the Casey Jones State Trail to draw tourists from all over the state and beyond. The area already draws a large tourist crowd to the Laura Ingalls Wilder Pageant in Walnut Grove and to the parks in the region. “Many of the tourists are showing up with bikes on the cars, ready to go for a ride,” explains Johnson. And while these tourists can enjoy an idyllic 6-mile looped segment of the trail from Lake Shetek State Park to the railroad museum in the city of Curry, it is not yet quite the end vision the group sees for trail tourism.

Yet, today when talking with the group it is clear that there is a lot of optimism for what this trail will eventually become. Those members that are the most politically savvy are meeting with legislators and making the case for funding the development of the trail. In recent years, with the recession, funding for trails has been particularly hard to secure. Yet, the Friends Group sees the investment in this trail as essential for the economic development in the region with tourism being an engine for sustainability going forward.

In the meantime, they are also celebrating the part of the trail that is already built. They organize events and sponsor photo contests for images along the trail. These images will likely show families and tourists biking through fields of prairie flowers, along meandering creeks, and licking ice cream cones in town.