Making a vital trail connection while restoring a prairie

So close, and yet so far. For years the 22-mile Glacial Lakes State Trail has been just five miles from the popular Sibley State Park. For bicyclists visiting the park, that’s five miles too many.

In 2011 park supporters decided that connecting the Glacial Lakes State Trail into Sibley State Park should be a top priority. Leading the charge was the volunteer-based group, Sibley State Park Improvement Association (SSPIA), who steadily beat the drum and built momentum. In 2014 the cards started falling into place with community leaders giving approval, plans being drafted, landowners lined up, and money appropriated to connect the trail.

“The benefits, support and opportunities of the Glacial Lakes State Trail extension to Sibley State Park were thoroughly thought out and planned by the community and, quite frankly, the outcomes are astonishing,” said Gregg Soupir, the area trails supervisor for the DNR:

Parks & Trails Council (P&TC) has been playing a key role by acquiring the necessary 153 acres at the edge of the park. “The SSPIA came to us because it was clear that without this land the trail wouldn’t happen, plus it would be a great addition to the park, yet the DNR was not in a position to acquire it then,” said Brett Feldman, executive director of P&TC.

The land was owned by a couple who previously farmed the land, but more recently had enrolled it all into the federal Conservation Reserve Program. This voluntary program reimburses farmers who set aside environmentally sensitive land from agricultural production and instead manage it for conservation benefits. Today those years of soil stabilization have made the land reminiscent of the region’s pre-settlement landscape: undulating hilly grassland. Park manager Jack Nelson has plans to eventually restore native prairie plants on this land, which is visible from atop Mount Tom–one of the most popular places in the park. 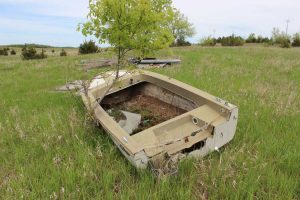 This boat in the field was included in the 123 tons of trash that was cleaned up.

Cleaning up an unsanctioned landfill

However, one corner of the land was far from pristine. Here, a former farmstead was surrounded by 123 tons of trash that included 588 tires, leaking appliances, hazardous wastes like farm herbicide, and crumbling boats to name a few.

In total, the SSPIA organized 29 clean-up days with 2-10 volunteers per day, plus another three days of work by Community Service Workers (a program for misdemeanor jail inmates), plus another 45 days where Dave Lais, who is the secretary-treasurer for SSPIA, worked solo doing hands-on clean up or coordinating the effort from home.

The long days of work for the volunteers often ended with a group picnic and refreshments. “This has really been a fun project and team effort to work on,” said Lais. “Our encouragement came from seeing this badly blighted farmstead take on a more natural and picturesque appearance, sort of like making a silk purse out of a sow’s ear.”

“The park is ecstatic to be the beneficiary of the friends group’s efforts,” said Jack Nelson, Sibley State Park manager, “along with that of the Parks & Trails Council’s.”

A community of support 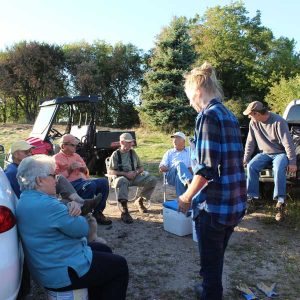 This is one of the higher profile projects the SSPIA has worked on. “We stepped out of our comfort zone,” said SSPIA member Dave Lais. “We met with neighbors, knowing not all were guaranteed to be supportive, plus county officials, DNR, legislators.” In 2013 SSPIA president Ron Erpelding testified at a state legislative committee, along with Beth Fisher of the Willmar Lakes Area Convention & Visitors Bureau. They also brought along the mayor of Spicer and officials from New London and Kandiyohi County to show support for the project.

“The friends group laid the foundation in the community; they were right out in front,” said Jack Nelson.

The area trails supervisor for the DNR, Gregg Soupir, mentioned that over half a dozen landowners will need to provide land or easements within the corridor. But he is optimistic and adds, “another truly amazing prospect of this proposed trail route is the support and verbal willingness of the landowners to sell property for the trail right of way…This kind of support and cooperation from public and private landholders is a rare commodity in rural Minnesota’s agriculture-based communities and really demonstrates a recognition and high value of this trail connecting parks, trails, schools and communities.” In addition, the school in New London purchased 82 bicycles so teachers can pedal with their kids out to fun and exciting outdoor learning opportunities along the trail.