The small, northwestern Minnesota city of Battle Lake is undergoing a transformation. It is quickly becoming a bustling community with an abundance of people zipping along on two wheels. The impetus for this change: the Glendalough Trail. 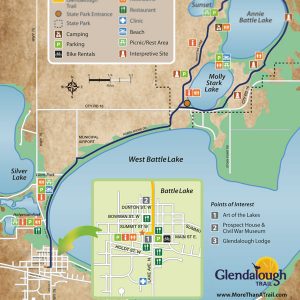 Map of Glendalough Trail, which was a key project of these Friends

The new, hard-earned trail starts in downtown Battle Lake, skirts the shoreline of West Battle Lake before heading into some nicely forested sections within Glendalough State Park. Within the park the trail loops around two small lakes. It covers 11.8 miles with the loop.

It is remarkable how quickly the trail has become ingrained into the area’s identity. While it has only been a few months since the trail’s official grand opening in September 2014 (portions have been open since July 2013), people are already asking, “What is Battle Lake without this trail,” says Lisa Malmstrom, a volunteer for the trail committee.

That was not always the case though. Malmstrom says that at first not everyone was convinced that a trail would make that big of a difference for the community.

Now, many downtown business owners are smiling; sales have already increased. Malmstrom says the tourism season is being extended, about a month on either end of the summer. “Visit downtown now and you see bikes filling the bike racks,” says Malmstrom.

Downtown is not the only beneficiary of the trail’s boom; Glendalough State Park is seeing a lot more action too. Prior to the Glendalough Trail, the state park was struggling to attract users. Now, park manager Jeff Wiersma says that he is seeing the highest visitation ever for the season.

This year, Glendalough was even chosen as one of only three state parks where the DNR has decided to launch a new lodging option: yurts, which are a cross between a tent and cabin. The structures have already been built and will soon be available for year-round use. The other locations for the yurts are at Afton State Park and Cuyuna Country State Recreation Area.

The efforts to build the trail began years ago. “Trails—they are not simple,” says Malmstrom. First they needed to rally the support of the city leaders in Battle Lake and the state park management.

Spearheading the effort was Dan Malmstrom (Lisa’s husband), who serves as a volunteer for the Glendalough State Park’s friends group. “Dan got the conversation started—he deserves a lot of credit,” says park manager Jeff Wiersma. At first, plans were limited to a paved trail within the park. The DNR’s top planners liked the idea but pushed Dan and the other proponents to think bigger—make the trail connect to the city of Battle Lake.

It just so happened, around that same time, city leaders had begun entertaining innovative options for revitalizing the city. A trail fit nicely into these discussions and planning got underway. That was in 2008.

By 2010, plans were still being developed and funding secured, but a boost came in the form of the new city policy of “complete streets.” The policy laid out the importance of enhancing the safety, access, and comfort for all forms of mobility, including bicyclists.

Funding can be a big hurdle in trail building. Several grants were awarded, including one from the Otto Bremer Foundation that helped the group’s outreach effort on behalf of the trail. With this grant, the group created a website to promote the trail: www.MoreThanATrail.com. Here users can plan their trip with a detailed map, a listing of upcoming events and info on the city’s tourist attractions.

The trail committee has already hosted several events along the trail, such as scavenger hunts and costume rides. They hope to do many more, believing fun events keep the trail a vibrant corridor, connecting the city and the park.