A lifelong park manager to the core

“Let’s sit down for a cup of coffee and chat.” You might say this type of invitation has been at the heart of Dave Lais’s style for decades of park management. And it helped him successfully double the size of Sibley State Park during a time when public sentiment was skeptical of government controlling land (a perennial concern). It’s also what keeps him as the go-to guy, even in retirement, for negotiating land acquisitions for the park.

For Lais, the job of park manager was more than just a job; it was a calling. And his passion has been infectious. Gary Bullemer, the assistant manager at Sibley State Park, worked under Lais from 1996 until 2001. Bullemer describes it as, “easily the best years of my time with MnDNR.It had the feeling of being part of something very special, much larger than having a job and co-workers. There was a real sense of history and of being part of a family at Sibley.”

Lais worked 38 years for Minnesota State Parks. He says he’s probably one of the last park managers who came into the job with no formal education. But his ties to the land were instilled early as he grew up on a farm in southwestern Minnesota. He has fond memories of running up and down the hills at Blue Mounds and Camden State Parks.

After high school, and then three years in the Army, he found a job at Fort Ridgely State Park. But he always wanted to get up to the lakes region around Sibley State Park. “And, well, it all came true for me,” he says with a twinkle in his eye. There were a few other stops along the way, as is often the case with park management jobs. He spent time at Buffalo River and Whitewater State Parks before arriving at Sibley in 1972.

There, he was greeted by the volunteers from the Sibley State Park Improvement Association (SSPIA) and their hopes to double the size of the park. Turns out, they had the right man for the job. Legislation passed the next year expanding Sibley from 1,300 acres to 3,100 acres. But, of course, that was just the first step. Next came talking to the 100+ people who owned that land, because the expansion becomes a reality only if they agree to sell. The DNR does not use eminent domain. 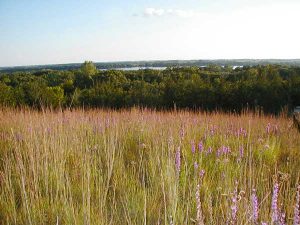 Lais had a way of easing into these conversations. “Slowly, you make fish with people,” he says. “You might have coffee and get acquainted and don’t even talk about the park much, and once you get to know them, sure, then there’s opportunity because they’re going to matter-of-factly give you their opinions.”

For him, these conversations were a chance to learn and share. That, along with a good dose of patience, kept people engaged. Sometimes, as much as years later, those conversations paid off as a landowner’s situation might change and then they’d want their land to become part of the park.

“Dave has a very quiet and sincere, persuasive personality,” explains Jack Nelson, the current manager of Sibley State Park. “He wins people over with the golden rule, laced with relentless effort.” Nelson goes on to say that it’s both humbling and inspiring to work in Dave’s shadow.
Today, Lais continues to be a strong influence on Sibley State Park, even in retirement. He volunteers much of his time for the park as a member of the SSPIA—the group that was invaluable to his job. The group has the distinction of being one of the longest, continually-running Friends Group in Minnesota.

Lais and the others from the SSPIA recently partnered with Parks & Trails Council of Minnesota to acquire a key parcel for Sibley that will bring the nearby state trail into the park. From start to finish, Lais ushered this project along. “He has been unbelievable in his commitment to obtain the parcel,” says Ron Erpedling, president of the SSPIA. Lais talked with the landowner, who was happy to sell and then coordinated endless hours of cleanup with many volunteers from the community to transform the land from an unsanctioned landfill into restored grasslands.

Building relationships has been the key to Lais’s success and is an inspiration to many. Today he enjoys the bounty of these relationships, as Bullemer explains that Lais’s many friends often visit and watch birds from the porch, and enjoy fresh baked treats that never seem to run out–thanks to his wife Ardys!