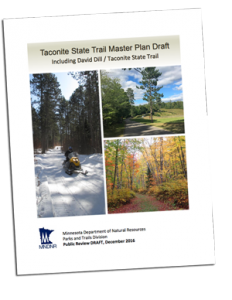 Parks & Trails Council of Minnesota recently learned of an attempt to bring off-highway motor vehicles also known as OHVs (that includes all-terrain vehicles known as ATVs, as well as off-highway motorcycles and 4x4s such as Jeeps which can be driven both on highways and over rugged non-paved areas) into State Parks through language in the final draft of the Taconite State Trail Master Plan that suggests such use may be permissible. This draft plan is open for public comments until Fri., Jan.6.

In fact, OHVs are prohibited from state parks according to state law, state park rules and by the DNR’s guiding principles for sustainable trail development. Therefore, such references to allowing OHVs in state parks should be removed from this plan.

The Taconite State Trail was developed and is used primarily as a snowmobile trail with parts of it suitable for biking, horseback riding, and hiking. Parts of the trail traverse sensitive natural resource areas, including land in two state parks: Bear Head Lake and McCarthy Beach. The decision to allow snowmobiles in state parks was made years ago and is not likely to be reconsidered. Now, however, the updated plan entertains the idea of adding year-round noise and the more destructive impacts from OHVs into state parks that have always banned them.

What you can do: Add Your Comments Now!

We encourage our members to share their desire to keep state parks as places where the sounds of nature dominate and natural resources are protected. Some key points to consider in making your comments:

Feel free to read our full comments for more details.