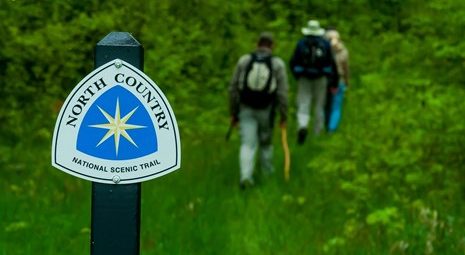 The longest National Scenic Trail in the country–the North Country Trail (NCT)–runs right through Minnesota on its way from New York to North Dakota; but there’s a snag in completing it that only Congress can fix. In 1982 a route was planned that would bring the trail through 70 miles of Minnesota wetlands. In retrospect that route was doomed from the start and to-date not a single inch of it has been developed. The logistical challenges and expense of creating boardwalks were just too great; plus it’s not the most scenic route.

Meanwhile, since that time, local trail advocates and volunteers have created 400 miles of contiguous hiking trails through some of Minnesota’s best scenery and most treasured landscapes. These trail miles, composed of the Superior Hiking Trail, the Border Route Trail and the Kekekabic Trail would make an excellent route for the NCT to follow instead of the original route.

The North Country Trail Association (NCTA) is the nonprofit partner working to develop the trail and has been working for years to get Congress to officially authorize the NCT re-route. Once the re-route is authorized, the NCTA can begin work to build 150 miles of new trail on the public lands in between the Kekekabic Trail and the existing NCT in the Chippewa National Forest near Remer, Minn.

While the efforts ran out of time during the 114th Congress that ended in Jan. 2017, there is hope that the 115th Congress will finally pass a bill to make it happen. The simple legislation has been introduced in the 115th Congress (H.R. 1026 & S. 363) with bipartisan support. The bill would also extend the NCT into Vermont to meet up with the Appalachian Trail which was the original concept for the NCT when it was first envisioned in the 1960s.

The NCTA wants to ensure the success of this legislation by getting 100 percent of the Minnesota Congressional delegation behind it. They are urging Rep. Jason Lewis and Rep. Tom Emmer to co-sponsor H. R. 1026. The NCTA is asking constituents of these representatives to call and urging them as well. Here’s suggested language to use in your phone calls:

“Hi, my name is __, I’m a constituent from ___, zip code ____. I don’t need a response. I am in favor of the North Country National Scenic Trail Route Adjustment Act (H.R. 1026) and I encourage the Representative to please co-sponsor this legislation. Thanks for your hard work answering the phones!”