After a flurry of activity, lawmakers are entering the final stages of the legislative process. The House and Senate presented their budget proposals to Gov. Dayton earlier this week, and now the three sides are working towards agreement on overall spending goals for each area of state government. Those negotiations, which will continue over the weekend, will ultimately decide the budget for Minnesota’s parks and trails for the next two years.

Gov. Dayton needs to hear from you: His budget offers a better path forward for parks and trails

The last few weeks we’ve been outlining our concerns with the state parks and trails budget proposed by the House and Senate (HF 888). Their budget does contain some good provisions (such as funding local grant programs for parks and trails), but overall is a big step backwards for Minnesota State Parks and Trails. Our concerns are threefold:

In short, if HF 888 becomes law in its current form, you’ll be paying more for less; it would cost more to enter parks, even though fewer services would be offered.

Earlier this week the House released a $600 million bonding proposal. It is not good for parks and trails. The House bill only includes $15 million for renovation and rehabilitation projects across all DNR departments (of which parks and trails are just one) and wouldn’t fund any additional park and trail projects. In contrast, the Senate and Governor have proposed more robust bonding bills for parks and trails.

Parks & Trails Council is continuing to talk with lawmakers on the importance of bonding for both taking care of the parks and trails we already have and developing new park and trail opportunities so more Minnesotans can experience the outdoors. If you haven’t recently urged your local legislators to support your park or trail project, they need to hear from you.

We expect bonding bill negotiations will continue until the last minute of session. The legislature must adjourn by May 22. 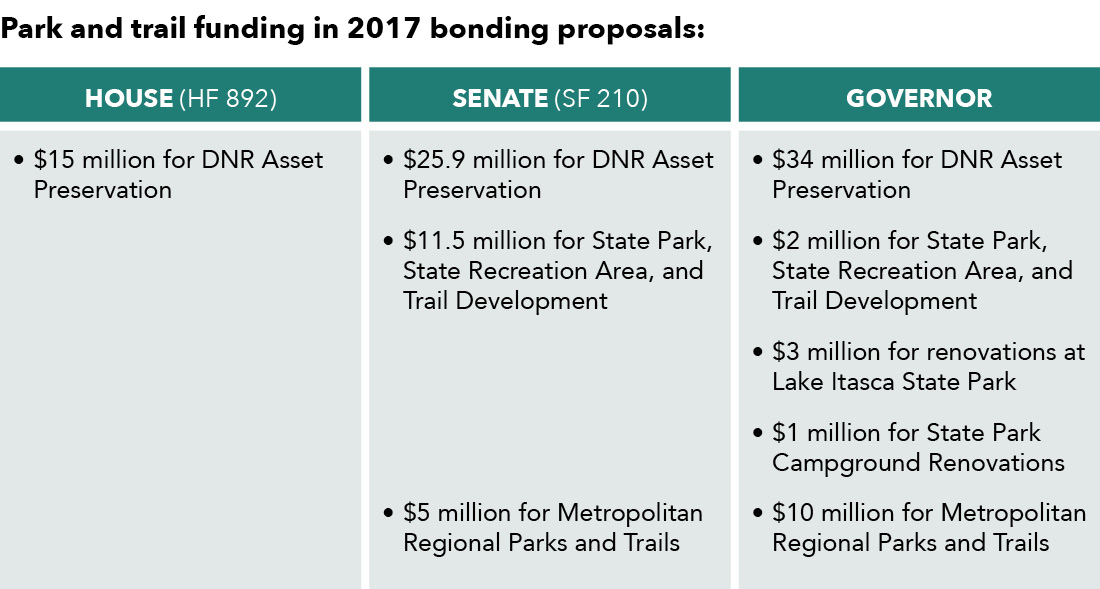 As always, Parks & Trails Council will be working hard at the Capitol on behalf of Minnesota’s special places. We’ll keep you informed as news develops. Please contact us with questions or concerns.