Stalemate in budget and bonding for state parks and trails

We’ve reached the end of a contentious week at the Minnesota State Capitol. Budget negotiations between Gov. Dayton and legislative leaders have reached a stalemate, and will be suspended over the weekend as lawmakers celebrate Mother’s Day and the state fishing opener. Negotiations are expected to resume early next week.

Most other major policy and finance bills are in a holding pattern until a budget agreement is reached. Lawmakers have one week to finish their work before the May 22 adjournment date.

The House and Senate passed their environment and natural resources budget bill (HF 888) on Tuesday, which Gov. Dayton promptly vetoed. Parks & Trails Council has expressed our concerns with HF 888 (see here and here), and is pleased Gov. Dayton remains committed to his budget proposal. In the governor’s veto letter, he wrote “this bill leaves a significant funding gap and makes unwarranted policy changes… [leading] to a significant reduction of environmental services and layoffs of public servants.”

Following the governor’s veto, the three sides will restart negotiations next week.

There was little movement on the bonding bill this week, as all effort was focused on budget negotiations. Last week the House released a $600 million bonding proposal that included very little funding for parks and trails. We don’t expect bonding negotiations to resume until a budget agreement is reached. 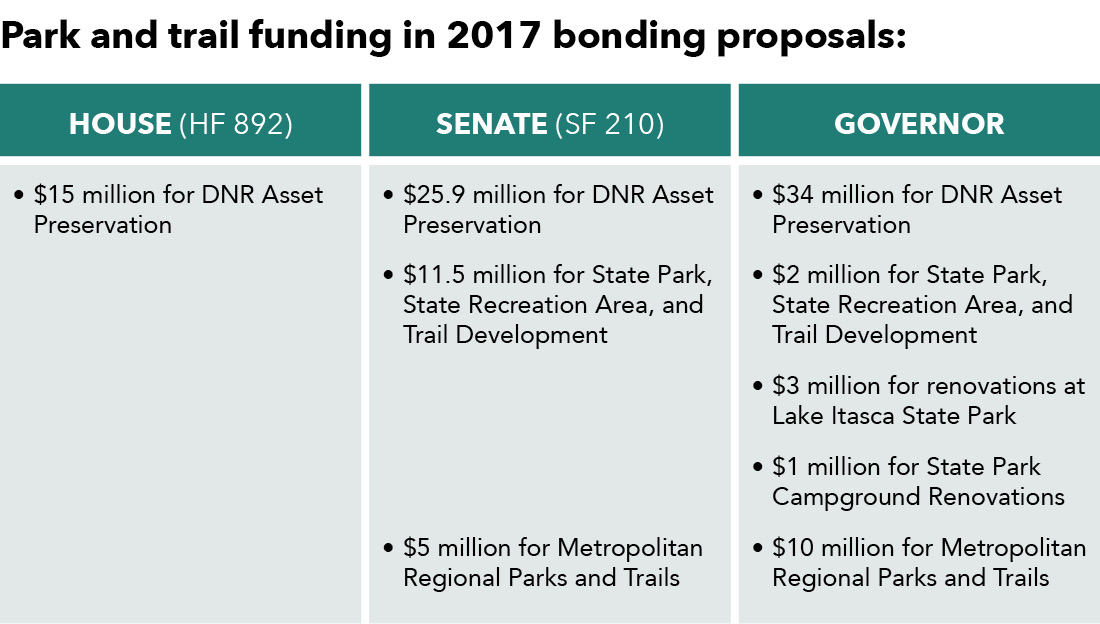 On Thursday, the Senate passed a bill (SF 550) appropriating revenues from the Environment and Natural Resources Trust Fund (which is funded by Lottery proceeds). The House is expected to vote and pass their version of the bill (HF 1265) on Monday. The House bill, in particular, is controversial because it removes numerous projects (including parks and trails funding) that were recommended by the Legislative Citizens Commission on Minnesota Resources (LCCMR). A conference committee will need to be named next week to negotiate differences between the two versions of the bill.

The conference committee on the Omnibus Legacy Bill (HF 707), which appropriates revenue generated by the Legacy Amendment sales tax, did not meet this week. While the Legacy Bill adheres to the allocation agreement for the Parks and Trails Fund, it is controversial for introducing “no net gain” policies and not following the recommendations of the Clean Water Council of the Lessard-Sams Outdoor Heritage Council.

As always, Parks & Trails Council will be working hard at the Capitol on behalf of Minnesota’s special places. We’ll keep you informed as news develops and let you know when and if you should reach out to lawmakers to make your voice heard. Please contact us with questions or concerns.