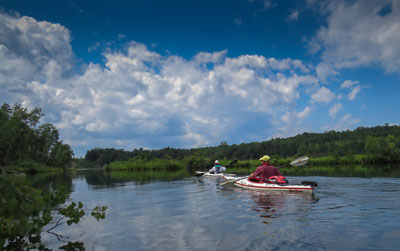 Most parks in the U.S. suffering from noise

Listen!… What do you hear? According to a May 5 report in the magazine Science, chances are high that even if you’re in a park, what you’re hearing is human-created sounds—and they’re muffling out the natural ones.

Researchers measured noise levels at 500 sites across the U.S. They found that 63% of parks and other protected areas are significantly affected by human-caused noises, indicated by at least a doubling of the amount of sound present.

Those areas designated as Wilderness fared better with only 12% suffering significantly from human-caused noise. However, considering that motorized equipment and vehicles are almost entirely banned within these areas, the ability to manage that noise would seem to rest outside the boundaries.

The study identified most park noises as coming from vehicles and the din of extractive industries like logging and oil drilling.

Other research has shown that such noises cause stress in both humans and wildlife. Birds for example rely on their songs to communicate vital, life-sustaining messages. Normally such songs would be heard for 100 meters, but with a ten-fold increase in noise (a level present in 21% of protected areas) that song travels a mere 10 meters.

People seek out parks as refuges from the stresses of urban life. And while sounds often register below the conscious level of our experience, they nonetheless have significant impact on health and behavior.

Several National Parks have instituted practices to reduce noise such as operating visitor shuttles to reduce traffic, although those shuttles themselves can be a significant source of noise. And in Minnesota, state parks prohibit motorized vehicles like ATV.

As our understanding of the extent and impact of noise increases, we can begin to think more creatively about solutions.