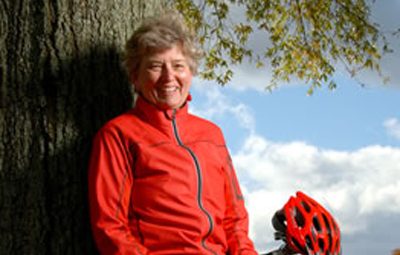 Our members’ stories are essential to our story. The deep connection we all have with the places preserved as parks and trails provide inspiration to continue to advocate for these special places. Here is board member Dr. Dorothy Anderson’s story.

As the eldest of 11 kids born to a rocket scientist, Dr. Dorothy Anderson was shaped by science, camping and moving. Science was instilled by her parents as the way to understand the world. Camping was what they did because it was the most affordable option for such a large family–but also because they loved nature. And moving from Oklahoma to Kansas and then to Alabama during the civil rights movement was eye-opening for the young Anderson.

She noticed what she would later come to understand as racialized landscapes. It was particularly noticeable to her because each weekend she’d spend time in two very different settings: She attended a predominately African-American church, and her family took weekly hikes in a forest where she never saw African-Americans. “I remember asking my parents why that was and them explaining what racism was.” Drawn to further understand that question, she would go on to study geography, anthropology and then land-use planning. “I really wanted to help plan landscapes that benefitted all of us.”

And as a professional she did that. Most of Anderson’s research was in understanding people’s experiences in protected areas and the benefits that accrue to people and society as a result of those experiences. Nearly all that research had real-world applications, often leading to policy changes that were used to implement management actions. Early in her career she worked with USAID, the lead US Government agency working to end extreme global poverty. Moving to the US Forest Service, she was a social science researcher for over a decade before becoming a professor at the University of Minnesota—Twin Cities.

As a professor she continued to focus on applied research. She says nearly all her research was spurred by land managers coming to her to address an issue they were facing in the field. Anderson retired in 2015 having finished her career at North Carolina State University where she headed the department of Parks, Recreation and Tourism Management for seven years.

Today, she brings her deep knowledge to bear on Parks & Trails Council’s board discussions. “Having her wealth of knowledge is a real asset, especially as P&TC delves deeper into research,” says Brett Feldman, P&TC’s executive director.

She learned of P&TC’s work over the years, and always supported the mission. She joined the board in 2014, shortly before returning to Minnesota from North Carolina. She’s excited to contribute to the organization in her retirement years, in between caring for grandchildren with her partner.

“Parks & Trails Council is small but effective,” says Anderson. “I feel good to be a part of this organization that is making a difference for people across Minnesota.” Ensuring that land is protected for parks and trails is vital work that people seem to intuitively know, because they so often seek it out. But Anderson notes that people often stop short of asking what their role is in helping it to exist. “Parks & Trails Council helps people understand their role.”

As someone who has hiked the intricate spiderweb of trails that exist in Italy, Anderson likes to envision a future Minnesota with interconnected parks and trails and communities. The system-thinking helps to blend the idea of recreation with transportation and daily living. “But it takes time to plan a system.” She is encouraged by the long-term vision Parks & Trails Council embraces.