FAQs on our Frontenac Project

Who owns this land now?

On June 26, 2020, Parks & Trails Council of Minnesota (P&TC) officially conveyed the land to the Minnesota Department of Natural Resources and it is now owned and managed as part of Frontenac State Park.

When and why did P&TC buy the land?

P&TC purchased this land from a private landowner in May 2017 with the dedicated purpose of securing its ownership so it could eventually be added to Frontenac State Park. We often hold the land in trust for an undefined period of time while our public partner secures funding and completes all due diligence. The land was not within the park’s legislatively authorized boundary when it was put up for sale. This prevented the MnDNR from purchasing the land.

Can we visit the land?

The land is currently in the process of being developed by the park staff for public use. Inquire at the park for further details.

What needed to happen for it to become part of the park?

P&TC worked with MnDNR leaders, local legislators and community members to garner support for adding this land to the park. In 2018, the Minnesota Legislature, with the support of local legislators Sen. Mike Goggin and Rep. Barb Haley, authorized the boundary adjustment for Frontenac State Park to include this land. Then, in 2020, public funding became available for the MnDNR to purchase the land.

What are the benefits of adding this land to the park?

It enhances the natural assets of the park.
According to the Frontenac State Park Management Plan, this land was identified for possible inclusion in the park due to its ability to “preserve and buffer natural resources, wildlife habitat and view-sheds that preserve the sense of wildness within the park from the potential impacts of future development.”

Adding this land takes advantage of the extensive and knowledgeable work done by the previous landowner to restore the prairie and oak savanna habitat to be compatible with the park’s ecological goals.

Adding this land provides opportunities to enhance the user experience of the park. This land holds a stunning overlook and incredible birding opportunities that would provide unique trail experiences. Other potential uses that could be explored are a group picnic site and group or walk-in campsites.

How and why did Parks & Trails Council get involved?

In 2015, through conversations with community members, P&TC’s then-president, Mike Tegeder, learned that the private landowners were interested in selling. Tegeder was invited to walk the land, including trekking up to the top of the bluff to see the vista. This experience left no doubt in his mind that the land belonged in the park.

Knowing that the MnDNR was not in a position to acquire it at that time,  P&TC began the process of acquiring the land itself and closed in May 2017.

What is that interesting looking building on the land and what are the plans for it? 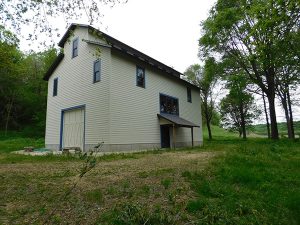 Barn-like building built to mimic style of a historic mill.

The building, while not fully finished inside, was built circa 2014 by a previous owner. The design is intended to reflect the look of a historic Mill that was located nearby. The floor level has been used for storage of tractors and large machinery that were used for prairie restoration work.

The MnDNR is in the process of determining its ultimate use or potential removal.

Generally, houses, barns, and other private development make land prohibitively expensive and logistically challenging for park acquisitions. They add to the acquisition costs even when the park ultimately has no use for them. Additionally, expenses are incurred from any building removal and the restoration of the occupied land.

This was a major consideration when Parks & Trails Council decided to purchase this land, but ultimately the value of the land for the park outweighed the impact of an uncertain building. If any other development had been built on this land, it likely would have negated the purchase for the park. This is a reminder of how Parks & Trails Council’s work to acquire critical lands often runs up against the steady beat of development encroaching near or within parks and trails.

Should we be adding this land or should we be investing in the maintenance of our current parks and trails?

Parks and trails are critical to Minnesota’s quality of life, our environment and our economy. Continuing this legacy requires taking care of what we have, while also working to protect additional, high-quality lands for future generations. We can and must do both.

The mission of state parks is to “protect and perpetuate extensive areas of the state possessing those resources which illustrate and exemplify Minnesota’s natural phenomena”(MN Statute 86A.05). The ability to add such land bordering a state park is a once-in-a-lifetime opportunity. Passing it up often results in the land being developed and hence made incompatible for a state park. It would be short-sighted to pass up such an opportunity.

Tour our land projects at Frontenac