This past July, the Minnesota DNR approved a new master plan for the Taconite State Trail. It was a plan we anxiously anticipated because of the implications it could have on introducing off-highway vehicles (OHVs) such as ATVs, into state parks. 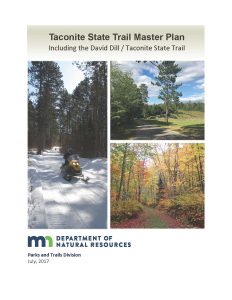 We are happy to report that many of the concerns we raised and encouraged our members to comment on, have been addressed in the plan. This was an important step in continuing the protections our state parks benefit from in terms of making it clear that OHVs are prohibited in state parks.

Our members played a critical role in this plan. Of the 180 comment letters that the trail planners received, the “majority” expressed concern and opposition to allowing OHVs on the state trail, specifically within state parks. Considering that the draft plan seemed to be treading a fine line in alluding to introducing OHVs without outright stating that intent, it was an important time to unequivocally denounce the idea, before it takes root.

“Such an out-pouring of concern for protecting our state parks is incredible,” says Brett Feldman, P&TC’s executive director. “We let them know how important this issue is to us–something that I don’t think they realized before.”

One of the most significant changes in the plan, which we were advocating for and that was made, is the statement on p. 34 of the final plan:

OHVs are prohibited in state parks per MN Rules 6100.1900, thus an OHV route around the park would be necessary. Also, the State Park Visitor Surveys and public comments during this planning process indicate strong opposition to adding OHV use within state parks.

Previously, the draft plan was less clear about the prohibition of OHVs within state parks and simply stated that a reroute may be needed to avoid state parks.

While we are heartened to see this important change in the Taconite State Trail plan, we realize that OHV groups continue to have a strong interest in removing the prohibition in state parks. We will remain vigilant to any attempt at changing state park rules (referenced above as MN Rules 6100.1900) or at legislation that would add an exemption.

To learn more about this issue visit our website at www.parksandtrails.org/advocacy/ohv-in-state-parks/