The 2018 legislative session closed with a flurry of activity over its final weekend, and a host of bills were passed in the final hours of session that impact Minnesota’s parks and trails. Now that the legislature is adjourned until next year and all the major bills have moved off the governor’s desk, we’ve broken down how parks and trails fared at the capitol in 2018.

State parks still closed to ATVs, at least for now

The legislature passed a 990-page “mega-omnibus” bill (SF 3656) that includes a supplemental budget and hundreds of miscellaneous policy changes. In the end, however, this bill proved too controversial and Gov. Dayton vetoed it in its entirety.

The “mega-omnibus” bill was on our radar all session because early versions included a controversial provision that would have allowed all-terrain vehicles (ATVs) to use the campground and access routes within Hayes Lake State Park. Thanks to many state park lovers that reached out to lawmakers, the provision was removed from the bill during negotiations and replaced with a compromise that calls for the DNR to study and recommend ways to expand access to, and recreational opportunities within, Hayes Lake State Park. The DNR will no longer be required to issue that report (because the bill was vetoed), but that doesn’t mean this issue is going away. We fully expect state parks will continue to face pressure to allow more and more motorized recreation. Parks & Trails Council is steadfast in our belief that Minnesota State Parks are not the place for ATVs, and we’ll continue to work hard to keep our parks quiet and natural showcases of Minnesota’s special places. Allowing ATVs to use our state parks would simply be a bad and unpopular idea: ATVs don’t fit the state park mission as defined by the Outdoor Recreation Act, their introduction is opposed by both state park visitors and management, and they would create numerous safety and natural resource challenges for park managers that are already stretched thin.

After a few fits and starts in bonding negotiations, the legislature passed a bonding bill (HF 4425) that includes $825 million in bonding projects, plus funding from a few other sources including the Environment and Natural Resources Trust Fund. Gov. Dayton signed the bonding bill into law on May 30.

The bill also included appropriations from the Environment and Natural Resources Trust Fund, which receives money from the State Lottery and is recommended by the Legislative-Citizen Commission on Minnesota Resources (LCCMR). This year’s LCCMR bill includes $10.9 million for park and trail projects, including money for state park and trail acquisition, enhancement, and reforestation; local park, trail, and natural area grant programs; the Superior Hiking Trail; the Swedish Immigrant Trail; the Mesabi Trail and the Red Wing Riverfront.

There are always two sides to a bonding bill, and for every project that was funded there are three or four left waiting for another year. And so, while we rejoice with the communities we’ve been working with that will receive funding this year, we also share the disappointment of the many communities that didn’t receive the overdue funding for which they’ve been working so hard. We remain committed to all the projects included on our 2018 Legislative Agenda and look forward to celebrating them with you in future years.

The legislature also passed a State Lands Bill (SF 3168) which includes a provision that expands the boundary of Frontenac State Park to include the land Parks & Trails Council purchased last year. Gov. Dayton signed the bill into law on May 20. We look forward to seeing that land become incorporated into the park and opened for everyone to enjoy. Thanks to the local legislators Rep. Haley and Sen. Goggin for seeing the legislation through. 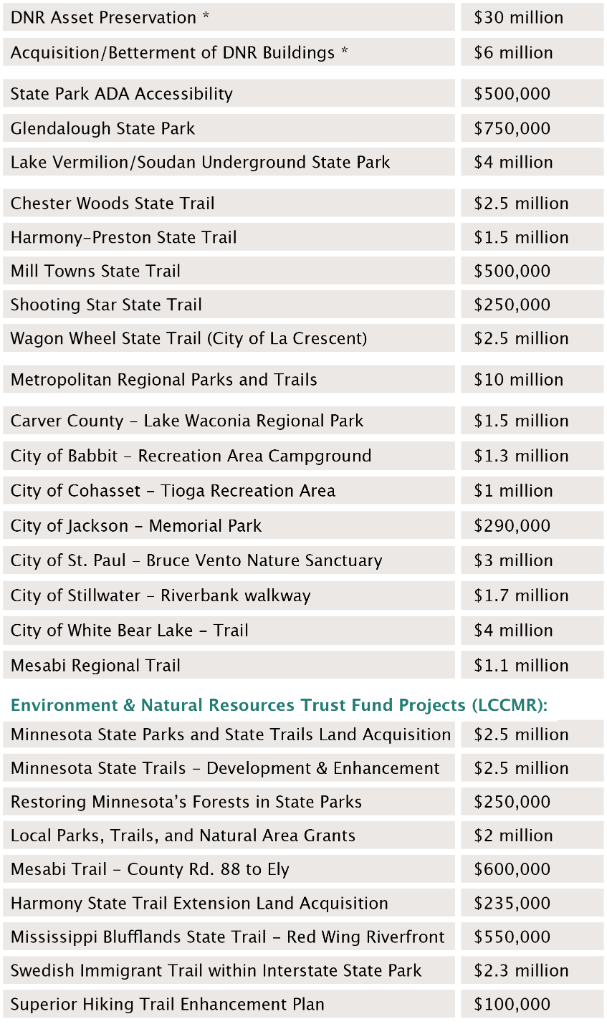 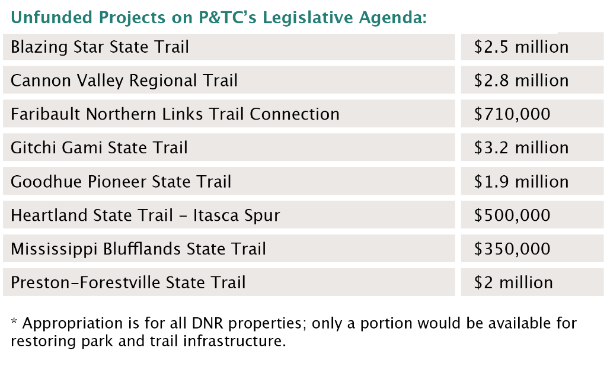 This story was originally published on May 22, and has been updated for content.