Former Sen. Keith Langseth knows a thing or two about how big projects get funded in Minnesota. He was the chair of Minnesota’s Senate Capital Investment Committee from 2000 until he retired in 2012. 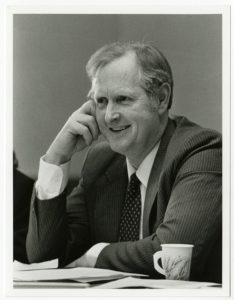 Sen. Langseth in a Senate Committee hearing in 1992

For the non-political-insider: that means he wielded a lot of power in crafting and ushering bills to fund Minnesota’s critical infrastructure such as highways, college campuses, flood protection projects and more. And parks and trails were not left out under Langseth’s watch.

“Parks and trails are an essential part of what Minnesota is about,” Langseth says. “They make Minnesota a great place to live.” In 2006 and 2008, that commitment was on full display as he helped secure the largest appropriations that state parks and trails had seen in a decade.

Deciding what gets funded and what doesn’t can be an agonizing task. Langseth said that typically he and the other members of the Capital Investment Committee were faced with many more requests than could be funded. “We had to say ‘no’ to two-thirds of the requests or pare them down,” he said.

It was strong local support that made all the difference for keeping trails from the chopping block. Langseth and the other legislators took notice of the enthusiasm trails generated.
Each biennium the legislators toured the state to learn about the projects requesting state funds. “We would stop in to communities, without question, trails received the most requests, no matter the size of the community.”

When asked why he thought communities seem to value trails and parks so much, Langseth points to two things: health and economics. “People use the trails to get out and about,” he says. And that helps keep them fit. And parks and trails are some of the biggest draws for attracting visitors to rural areas of the state. 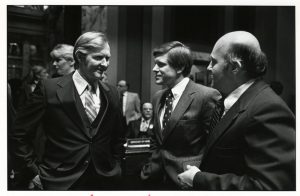 Sen. Langseth (left) talking on Senate floor with other senators.

On this front, he sees how state parks and trails serve another important service: helping to bridge the urban-rural divide. “They offer such good opportunities for people in urban areas to visit and interact and talk with people in the towns.”

As a former dairy farmer himself, he encountered the misconceptions urbanites can have about farmers and rural life in general—one he says goes both ways. So, increasing the opportunities for bringing urban and rural folks together is important.

Langseth has spent nearly half his life with one foot in the city and one in the country. During his 37 years in office he rented an apartment near the Capitol in St. Paul during the months the Legislature was in session. But once the session was over, it was back to Glyndon, a town of about 1,000 people near Moorhead. “It’s a change of pace, moving from one to the other,” he said.

When he was first elected to the Minnesota House in 1975, it was a bit of surprise, seeing as he was a Democrat in what was then one of the most conservative parts of the state.
But even as he lost the following re-election, he quickly dusting himself off. The next year he got elected to the Senate; and he was re-elected in every election thereafter until retiring in 2012. “I never dreamed it would be that long,” he said. 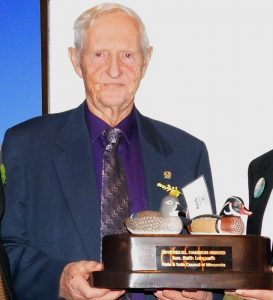 As a politician he accepted that people come together to discuss diverse ideas for getting things done. “Democracy doesn’t work when people are too rigid,” he says. “You need to put yourself in the place of other people.”

This ability is what made him so adept at delivering big investments in Minnesota’s parks and trails along with those in higher education and other critical infrastructure. A legacy a leaves for Minnesota.