Youthful Stewardship and Other News at Glendalough State Park

During the past few years, Walk for Glendalough participants have witnessed the enthusiasm and involvement from a growing number of young people. In fact, a few area students have become annual award recipients for pledges they have raised for the Walk. This creates a great sense of optimism among DNR professionals and the Citizens Advisory Board members. 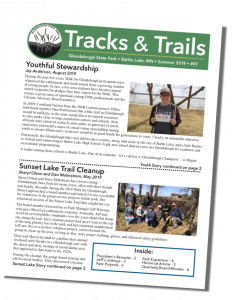 In 2009, Courtland Nelson from the DNR Commissioner’s Office told board member Dan Malmstrom that a bike trail in Glendalough would be unlikely, as the state would direct its limited resources to state parks close to large population centers and schools. State officials were intent on using its state parks as gateways to teach, experience and instill a sense of conservation stewardship among youth to ensure Minnesota’s resources would be in good hands for generations to come. Clearly, an admirable objective.

Fortunately, the Glendalough bike trail did become a reality, along with trails in the city of Battle Lake, and a Safe Routes to School trail connecting to Battle Lake High School. Eight area school districts now use Glendalough for academic and recreational programming.

A leader among those schools is Battle Lake. One of its students – let’s call her a “Glendalough Champion” – is Megan Hodenfield. Megan has received top honors for several years at the Glendalough Walk for the donations she has raised. Recently, she responded to several questions about her motivation to support Glendalough State Park.

What motivates you to be the biggest youth money contributor to Glendalough State Park year after year?

To me it’s a fun challenge to see how much I can raise, but of course there are the prizes that are fun to try and win. It’s really fun to have the challenge of seeing how much money you can raise; I’ve found that people can be really generous. I like the Walk because it celebrates Earth Day and the beginning of spring. 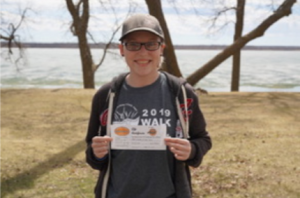 Megan at the annual Walk for Glendalough. Photo courtesy of Glendalough Park Partners

Why is the park important to you?

I’ve lived in Battle Lake my whole life and I’ve been going to Glendalough ever since I can remember. It’s our favorite swimming place, especially because Annie Battle Lake is a heritage lake and it’s very quiet with nothing motorized allowed. If you look closely in the contact station, you’ll see a photo of me when I was little and tagging butterflies.

I like Glendalough and all state parks because the land is protected from people who want to cut down and harm nature. It’s a safe place for plants and animals to thrive without a lot of interactions from people. It is wild, like the way it would be without us polluting and killing everything.

What would you like to tell other young people that might motivate them to be involved in fundraising with the park?

What I would tell other youth is that it is a fun challenge to try and raise as much money as you can and it’s even more fun to get a team together and see who can raise the most money. Last year I went around with a friend to raise money and it’s a great motivator to raise money with friends and have lots of fun at the same time. This year I was by myself when I went out to raise money, but I still had a lot of fun trying to meet my goals.

What would you like us to do with money donated to the park?

They always use the money for important things in the park. In the past I have liked to participate in the programs they’ve had like archery and butterfly catching. I think it would be cool to spend the money on things that help preserve the park and the animals that live in it.