Energizing the park with innovative ideas and community programs

More often than not, cutting-edge ideas come from those outside the rank-and-file of an organization. This is part of the reason friends groups are such an asset for parks and trails. They bring a wealth of perspectives and energy unconstrained by the status-quo.

The Friends of Lake Bemidji State Park’s recent project is the culmination of persistence in innovative thinking. 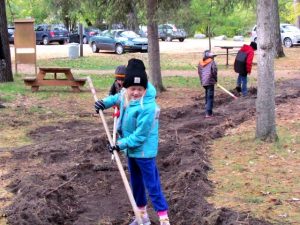 The idea was relatively simple: create a playground where youth creatively play with sticks, branches, rocks and other natural materials found in the park. Today, such “natural playgrounds” are more common, but only ten years ago the concept was just being introduced.

The friends had to find a way to get their idea accepted. They enlisted a graduate student from nearby Bemidji State University to draft a plan as part of their master’s project.

Eventually, they succeeded and the plan became reality last year as volunteers rolled up their sleeves to dig, grade, and build. The centerpiece is a giant tree branch, the apparent victim of a windstorm in the park, which now proudly emerges out of the ground where volunteers securely buried it. It’s new life as a jungle-gym has kids balancing, hanging, jumping, or any other creative activity they can think up. 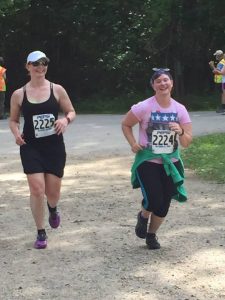 In the years that it took to complete, the friends remained productive with other projects for the park. They coordinate two annual fundraiser breakfasts in the park’s historic dining hall.

They help organize programs, such as “Music Under the Pines” that bring in local musicians to perform in the park’s amphitheater. They cook-up lunches for youth who participate in the special deer hunts in the park, which are designed to protect the park’s natural resources from overgrazing.

They are planning to wade into a pond later this fall to help install a device designed to keep beavers from building a dam that would flood nearby homes. The goal is to keep beavers happy in the park without upsetting the neighbors.

This friends group is a busy bunch who bring that extra-special touch to a park that’s loved by so many.