Turning a loss into a bright new future

When Blue Mounds State Park’s lost its swimming lake to a flood in June 2014, there was robust debate about whether to rebuild the dam that created the lake. The ultimate decision to not rebuild led to the formation of a citizen advisory group in 2017. Their goal: plan the park’s new future. 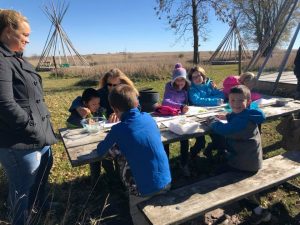 The friends sponsor youth engagement events in the park.

Creative ideas flowed and the advisory group was invigorated. So, as they wound down their task of providing input, they quickly transitioned to create a permanent friends group devoted to enhancing the experience of Blue Mounds State Park.

Since then, the group has been organizing events, volunteering at park cleanups, fundraising and generally championing the park.

One theme the group embraced is the park’s status as a “Core-Adventure Park.” This was designation given by the MnDNR because of the park’s unique Sioux Quartzite cliff, which is a destination for climbers near and far. As such, the friends group organizes a couple “Adopt-a-Crag” events per year to remove invasive plants and woody vegetation around the park’s popular climbing area. 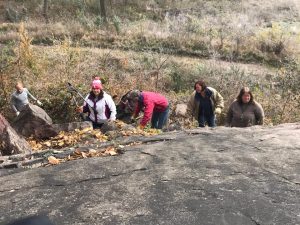 The friends organize “adopt-a-crag” events to maintain the climbing area.

While the group promotes the climbing opportunities in the park, they realized that there are a lot of barriers to participation. “It’s a challenging sport to get started in,” explains Amy Nelson, president of the friends group. So, this fall they organized a free climbing event for youth ages 5-18.

“We thought, this is a great way to get the community out here to try it.” The friends partnered with Roca Climbing to provide all the gear, safety precautions and instruction for any skill level to try the sport. The event was sponsored in part by a grant from Parks & Trails Council of Minnesota. The friends group hopes to continue to offer these free events in the future. 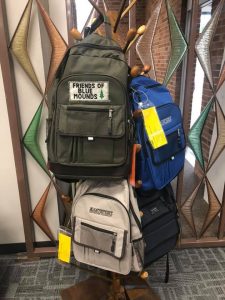 Backpack of resources can be checked out at the local library

Getting new people out to the park is important for this friends group. As such, they have partnered with the Luverne Area Community Foundation on a Park Rx program. The program provides free backpacks that can be checked out from the local library. The backpacks are full of resources to enjoy the park, including a free day pass to the park.

Events had been a focus for the group, but with COVID-19, many have been put on hold. They had been partnering with a ultra-marathon running to host a race in the park. They were all ready to go last spring when the inevitable cancellation happened. They’re hoping that next year brings the opportunity to revive this and other events.

Now, the group is starting to focus on plans to build a nature play area in the park. “It’s something we’ve been wanting to build since the advisory group first met,” says Nelson. “We’re hopeful the timing could be right to get it done.”