Welcome along on a forest bath

Forest bathing: what an intriguing term. Have you heard of this?

If you’re like me, you’ve seen the idea popping up here and there, but have never come across a satisfying explanation of what it is, exactly. So, when I saw an opportunity to participate in a 2-hour, guided forest-bathing session at a nearby park, I jumped at the chance to finally figure out this mystery. 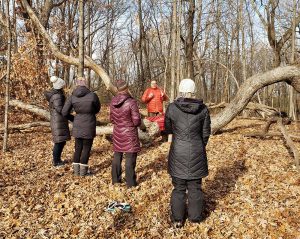 Gathering to participate in a forest bathing exercise at Carver Park Reserve.

I arrived at Carver Park Reserve in Victoria, Minn. on a cold, fall morning where a small group of fellow bathers were all bundled up in winter coats, hats and mittens, milling about and anxious to embark on a new experience. No one seemed to know exactly what to expect. Our guide, David Motzenbecker, who is certified as a Shinrin Yoku Guide from the California-based Association of Nature and Forest Therapy (ANFT), corralled us to start on our journey.

After a brief priming on the history and benefits of forest bathing (more on that later), we all walked down the trail and gathered in a circle in the forest to begin our first “invitation”— invitation being a deliberate word choice to suggest that we were not required to participate, although peer pressure seemed to necessitate otherwise.

Regardless, we all closed our eyes, as suggested, and began to attune our non-visual senses to the forest. As humans, eyesight tends to dominate our experiences (although not the case in people with visual impairments), so by closing our eyes we could focus on sounds and feelings that often go unnoticed. David suggested we pay attention to the feeling of gravity and how it was pulling us to the earth. Next, we imagined roots growing from our feet and down into the soil. We turned in a circle to feel the subtle changes in wind, sounds and sunshine. Then we slowly re-opened our eyes and focused on whatever was in our field of vision with new intensity.

We continued with several more “invitations,” but this first one perfectly illustrates the concept of forest bathing; it is any experience in the woods (or natural place) that actively utilizes the five senses of sight, touch, hearing, taste and smell to help a person relax and become synchronized with the forest. At its core, no guide is required, nor any rigidly prescribed activity sequence. However, a guide is helpful, simply because the act of slowing down enough to fully attune to nature runs counter to our society’s reinforced behavioral norms.

In Japan, where the concept originated, forest bathing or shinrin-yoku (森林浴), is rigorously studied and validated within government institutions. In fact, the term shinrin-yoku was first coined by the Japanese Ministry of Agriculture, Forestry and Fisheries. That was in 1982. Today, numerous institutes are dedicated to its study and promotion, primarily in Japan but growing in other places. Most of the studies have focused on the health benefits, which include lower stress hormones, improved feelings of happiness, lower blood pressure and a boost to the immune system. 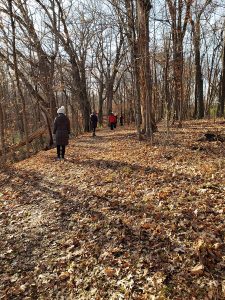 Walking at the speed of trees down the path

Back at Carver Park, I continued my forest bathing experience by shuffling down the trail, “at the speed of trees,” as David put it. My fellow bathers and I spread out, moving wherever we felt pulled, each of us looking in different directions with eyes wide, looking up, right, down. A passerby may have concluded they stumbled into a Twilight Zone episode where the plot involved hikers who lost touch with reality due to a weird mind-meld force in the woods. What we were actually doing was noticing movement in the forest—watching how a blade of grass trembles or a group of cattails dance. It felt like experiencing poetry, even if we did look like zombies.

We threw out societal norms for how to behave in a park, and it was liberating. That being said, I was glad that the only non-forest-bathers we saw during our bath was a pair of hikers off in the distance.

After each activity our guide gathered us together to reflect with the group. He assured us that there were no right or wrong reflections. This sequence, of a semi-guided activity followed by group reflection, is a model developed by the ANFT. As you may recall, our guide, David, was trained and certified by the ANFT. However, the model can be modified to suit cultural norms, as David told me that a Finnish guide he knows cuts out the whole sharing business when she leads groups, explaining to him that Finns, who are known for stoicism, prefer to reflect internally.

The ANFT was established by a Californian man named Amos Clifford, who took the Japanese concept of forest bathing, with its deep scientific basis and layered in his understanding of various indigenous worldviews, paired with his western education as a counselor to create a framework for how to guide a forest bathing experience. The ANFT is now the largest forest-bathing organization in the world, making its way of doing forest bathing a driving force in the movement. 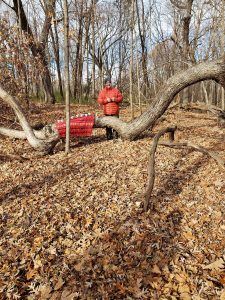 For our final circle time, David set out cups of tea for us and encouraged us to internally reflect on our experience. With that, our forest bath concluded and we headed our separate directions, perhaps each a bit more relaxed and receiving the many other health benefits that have been documented from forest bathing. My husband, who partook in the journey, said he definitely felt more calm and at peace afterward. For me, it was a sense of serenity (although with some social anxiety mixed in, perhaps owing to the nature of any new experience with strangers), but more importantly, I felt a deeper connection to the natural world.

For those who want to experience forest bathing yourself, a new self-guided, forest bathing trail at Silverwood Park in St. Anthony is a great introduction. The trail, which opened in December 2020, was designed with the help of David Motzenbecker and is certified by the Association of Nature & Forest Therapy (ANFT). It is the first ANFT certified trail in Minnesota. 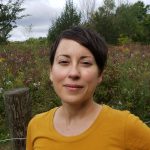