From Friends of Chester Woods

Much of Chester Woods is infiltrated with buckthorn and other woody invasive specis, especially in the undeveloped areas of our park. We have forested areas where buckthorn is almost the exclusive species on the forest floor. The Friends of Chester Woods board in 2021 has committed financial resources of $6,000 yearly for a 5-year period to address this problem and hopefully restore sizable areas of our forest. Volunteers Jim Peterson and Jerry Pruett explain what buckthorn will do if left untreated: It will take over a forest, sapping the majority of nutrients in the soil meant for the native vegetation along with crowding out the natives as well. 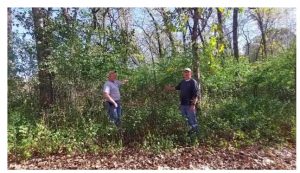 What we have learned over the last few years is that cutting buckthorn alone without follow up treatment is worse than doing nothing. The cutting alone allows the seeds to fall and spread even more thoroughly, and with the additional sunlight, the buckthorn spreads rapidly, creating much denser stands of young buckthorn and making removal even more difficult. Jim and Jerry, with the help of park staff and other volunteers, are implementing several long-term strategies. These include first cutting buckthorn in a manageable area and then letting it re-sprout to a height of about 1 ½ feet. After that, an herbicide is used to spray these areas of regrowth. The results thus far have been very encouraging. Over the rest of the growing season, they observed that the re-sprouting buckthorn was dying.

The area where this project was implemented is about 3 acres and had thousands of young buckthorn plants mostly between 5–8 foot tall. The buckthorn was cut in late winter by a volunteer with the park’s forestry mower. By the end of July, the buckthorn regrowth was deemed ready for spraying and a herbicide called Garlon was applied. The most effective spraying method was done using the Park’s 50-gallon boom sprayer with the tank mounted in the back of an ATV. After the initial spraying they followed up with hand spraying any plants missed by the boom sprayer. We are anxious to see how much buckthorn will be present this coming spring and the hope is that we can manage the area with just follow up spot spraying where new growth occurs. This method was also implemented on 2 other smaller areas in the park with similar results. 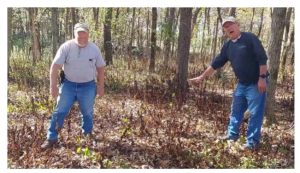 In addition, this method of invasive woods vegetation control with some modifications has been initiated in two other areas of the park as well. On the east side of the park there is a 3 acre parcel that has a greater variety of woody vegetation with many of the plants being desirable. Along with buckthorn there was substantial amounts of honeysuckle which needed to be removed. The method of choice was to use an electric backpack sprayer and without the initial cutting of the buckthorn. Our volunteers, Jim and Jerry soon observed that the early spring spraying of standing buckthorn and honeysuckle was effective. It only took a couple of weeks to see an effect and the area soon opened up the forest floor. Although spraying in late summer and early fall seems quite effective it appears that early season spraying is probably the most effective due to the more rapid growth that takes place at this time of year.