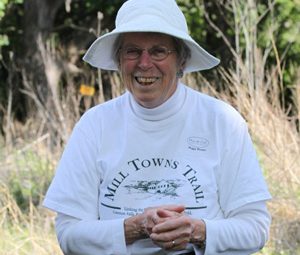 Peggy Prowe’s efforts to create the Mill Towns State Trail began more than 20 years ago, while she was serving on the Northfield City Council. The way she describes it it was just a logical idea to connect two already existing trails: the Sakatah Singing Hills State Trail and the Cannon Valley Regional Trail.

There have been many challenges along the way. Through it all, she has maintained an unflagging determination. Today, after 20 years of sustained effort, the Mill Towns State Trail consists of a meager—but greatly appreciated—three miles of paved trail, two trailheads, two tunnels, and 1.5 bridges.

When you mention this progress to Peggy, she just laughs undeterred and adds, “but we have lots of plans in the works.”

“She is tenacious, gentle, intelligent, and tells it like it is but knows how not to offend,” says fellow advocate and Parks & Trails Council board member Emily Nesvold.

Ms. Prowe has a distinct ability to rally others toward the trail. In the early 1990s  she helped organize volunteers into a group called the Friends of the Mill Towns State Trail. Together they help raise funds and meet with legislators and planners from the DNR.

It started out with letters to the editor and other organizing efforts, and has blossomed into a community-wide effort. “It’s all because of Peggy,” says Meg Otten, the current president of the Friends of Mill Towns State Trail. “Without her this whole effort would have fizzled out. This is a woman who believes in the benefits of the trail with every fiber of her being and through her strength of personality she gets people to be part of it.”

Each year Ms. Prowe rounds up a group of volunteers to attend Parks & Trails Council’s Day on the Hill where they visit with state legislators.

“As long as I have known Peggy, which is a fair amount of time, she has been organizing citizens or leading the way on the city council for bike trails or hiking trails,” said Rep. David Bly (DFL, Northfield).

She also has learned to keep a close eye on project details so that when legislative action is needed, she helps educate legislators on what they need to do to move it forward. This past year she worked with Parks & Trails Council staff to get a $476,300 appropriation for the Mill Towns State Trail to acquire land and develop the trail from Faribault to Dundas, Minn.

Ms. Prowe says she is motivated by her love of the outdoors and a desire to help others get out and enjoy nature. This theme has run through her whole life. As a young adult she led wilderness canoe trips and was a camp counselor. Then after earning a Masters Degree in Physical Education in 1965, she went on to teach and coach at Carleton College in Northfield. She served on the board of Parks & Trails Council from 2002-2008 and is currently on our legislative committee.