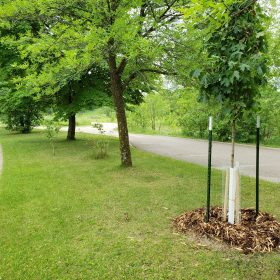 The large ash trees at Maplewood State Park have provided shade and habitat for decades. But the DNR sees the writing on the wall for these beautiful trees that are being threatened by the invasive insect known as emerald ash borer (EAB). Rather than sit back and see what happens, and knowing that attempts to save the trees once the insect has moved into the area have proved challenging at best, the Friends of Maplewood State Park have coordinated planting new trees.

This summer, 15 sugar maple trees were planted, which are between six to ten feet tall. “We didn’t want to plant saplings,” said Friends’ board member Stu Peterson. The larger trees generally have a better success rate and have a jump-start in the goal of maintaining the tree canopy. The trees are in some of the most used areas of the park, such as the park office and campground. “They went where we make the best first impression,” said Peterson.

While EAB has not yet spread to northwestern Minnesota, predictions say it’s only a matter of time. Sugar maples were chosen because they are not susceptible to the EAB, they also fit in with the parks’ namesake, which are promoted each fall during the Friends’ annual Leaf Days event. And some day, these maples may be included in the park’s popular maple syruping program.

This habitat restoration project is funded by Parks & Trails Council under a pass-through grant program made possible by the Henry S. Crosby Foundation. Friends of Maplewood contributed a financial match to support the project. Four other restoration projects were funded in other state parks.