Where Gretchen the Lion once roared, park visitors will soon stroll

You wouldn’t guess it by strolling the grounds today, but the property Parks & Trails Council acquired for Charles A. Lindbergh State Park in 2020 was once famous for the menagerie of wild animals that lived there when it was the home of the Smuda Zoo. It all started in the 1960s when siblings, Frank and Louise Smuda brought home a pet European deer for their niece, Alvina, who they cared for. Curious neighbors started coming to see the deer, so they added pheasants and quail to keep their visitors entertained.

They considered it more of a hobby than a business–something to keep them busy. They charged an entrance fee that was only enough to cover expenses. Their sole employee, Simon Podraza was quoted in a 1988 article in the Brainerd Daily Dispatch as saying, “If a fella didn’t have anything to do, well, the days would be longer than a son of a gun.”

Within a few years they had about 50 species of animals, including a kangaroo, wallaby, llama, porcupine, ferret, ostrich, badger, pony, goat, wolf, chimpanzee, and even a lion, whom they acquired in 1968 from the Como Zoo in St. Paul. Conservation officers with the DNR enlisted the Smudas’ help in rehabilitating injured animals, which occasionally become permanent residents if rehabilitation proved unsuccessful.

They continued running the zoo until about 1991, at which point Frank was 81 and Louise 77. Over that time, they likely had hundreds of thousands of visitors, including many schools groups. 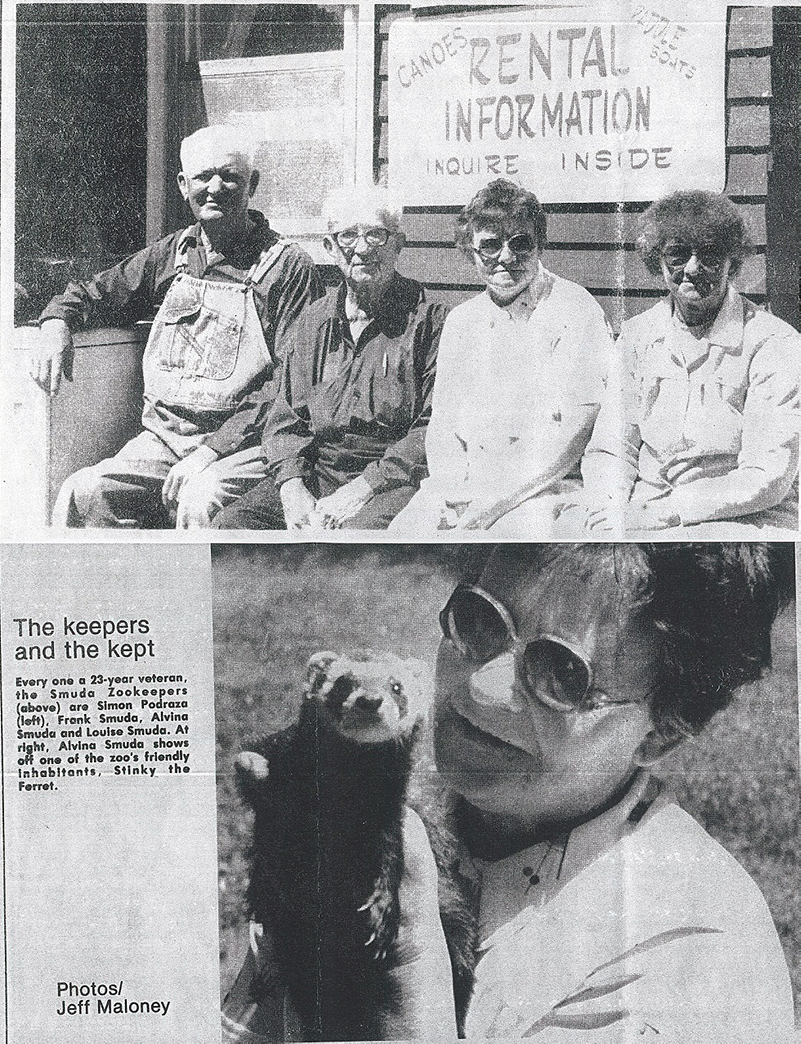 “Quoted from the newspaper caption: Every one a 23-year veteran, the Smuda Zookeepers are Simon Podraza (left), and Frank, Alvina, and Louise Smuda. At right, Alvina Smuda shows off one of the zoo’s friendly inhabitants, Stinky the Ferret.”
The Brainerd Daily Dispatch Southern Edition. June 15, 1988.