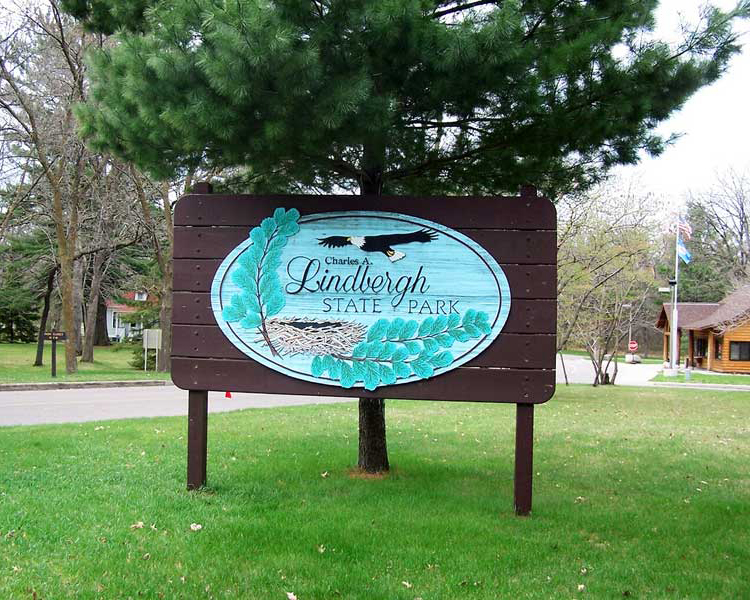 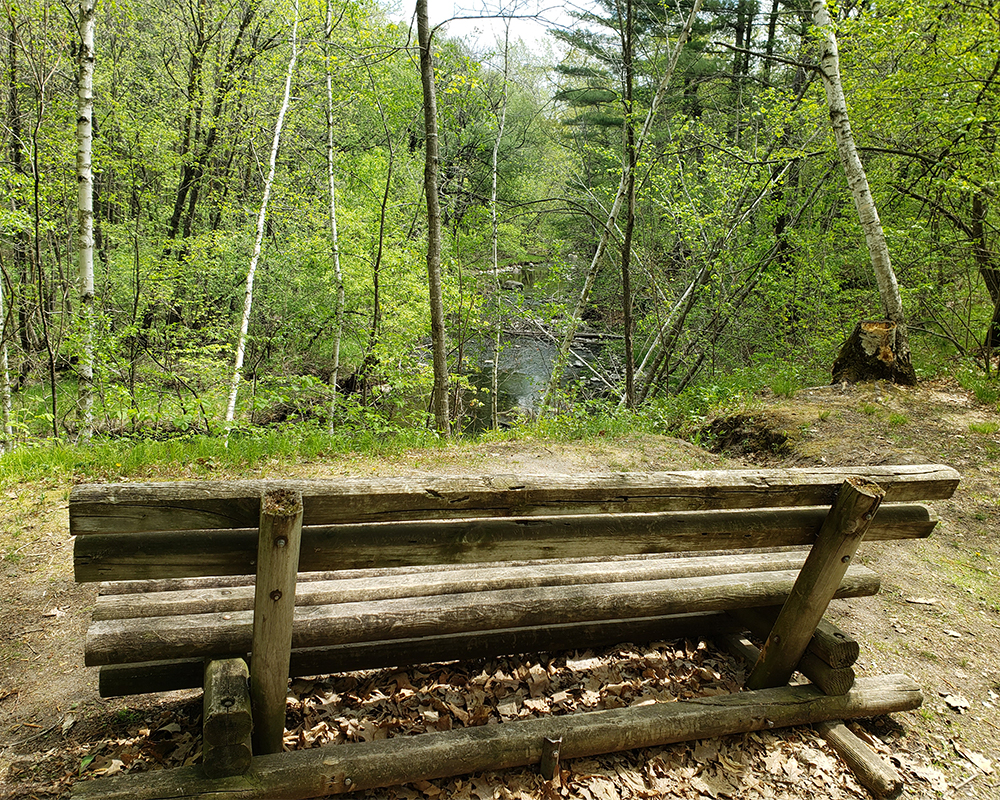 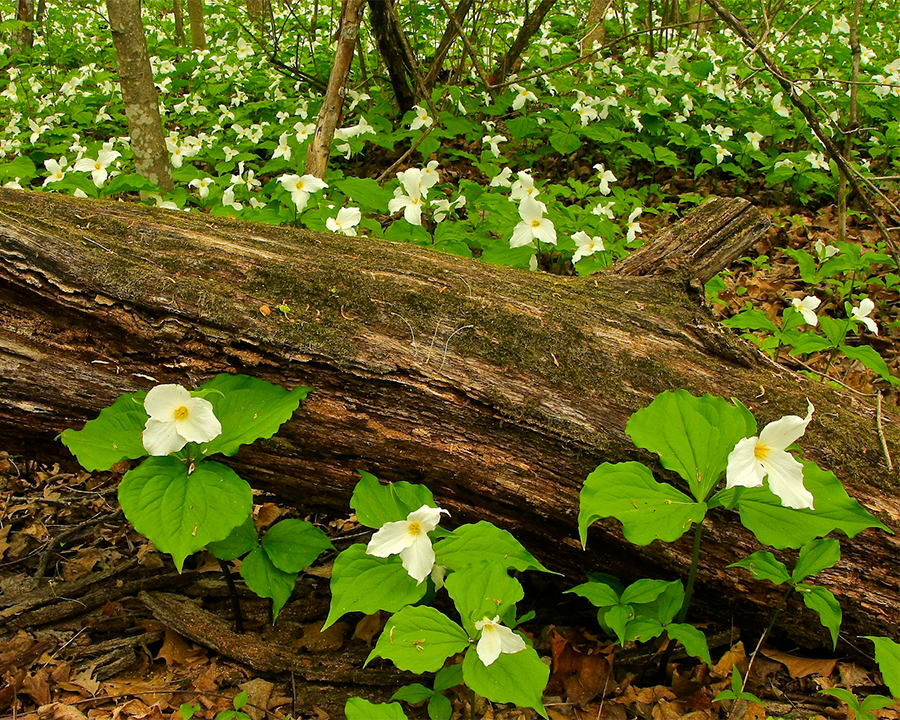 Spring flowers blooming in the park. 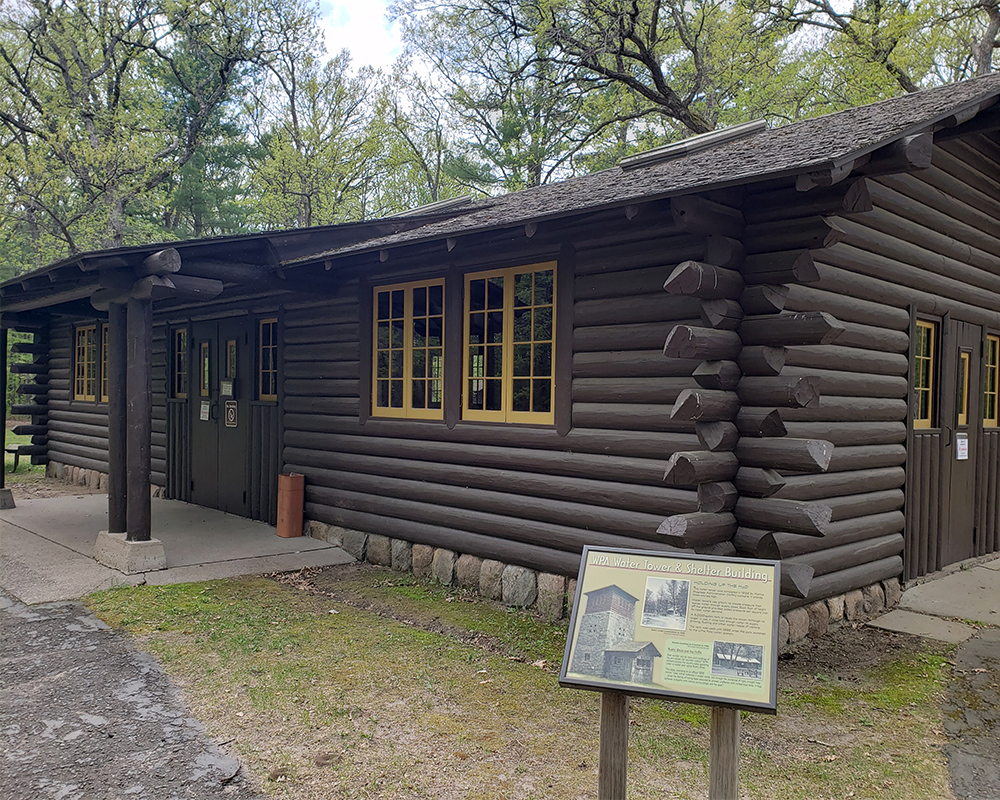 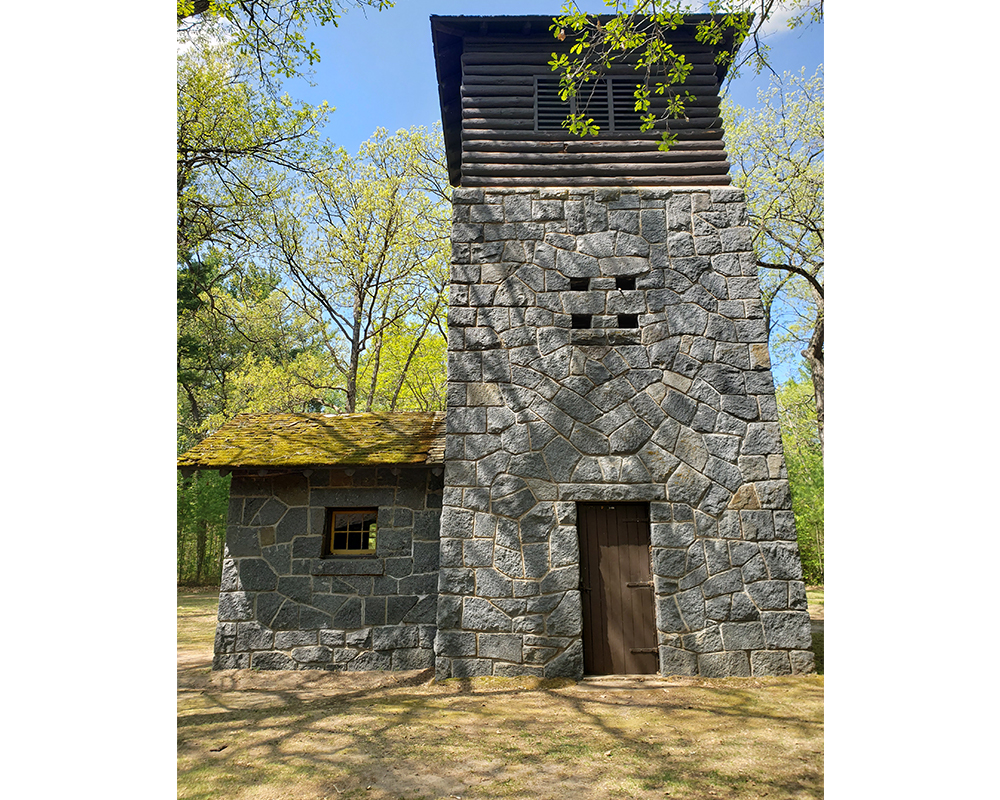 Historic water tower built in 1939 by WPA workers was used until 1965. 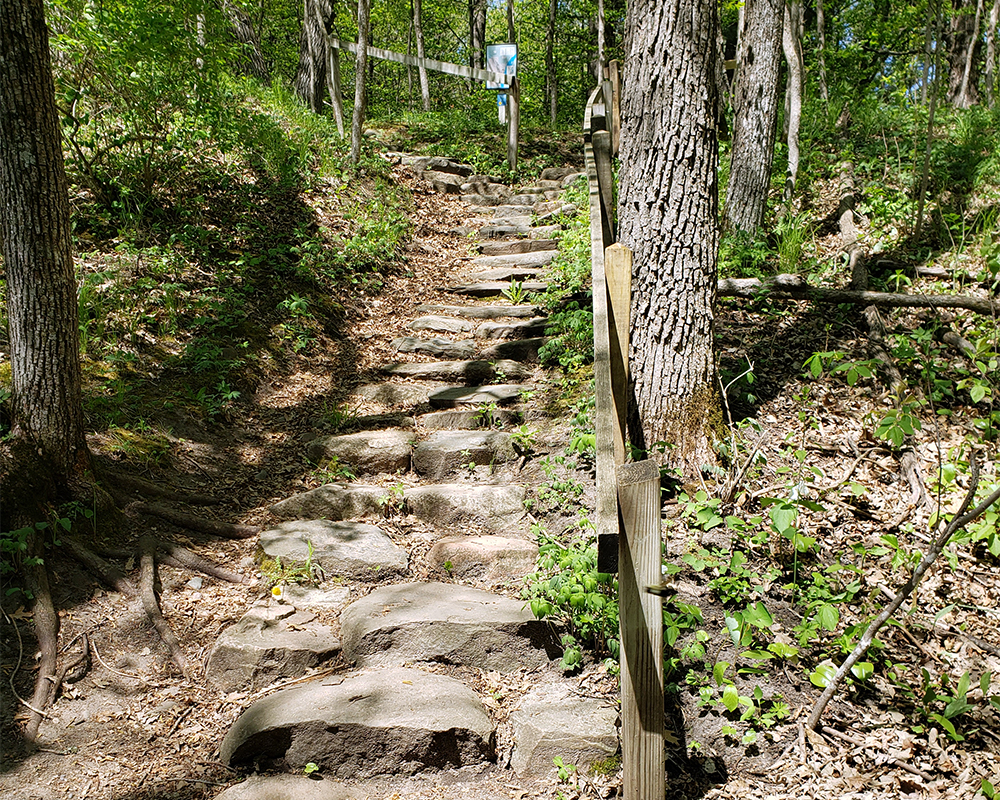 Stone stairs lead up a hill in the park. 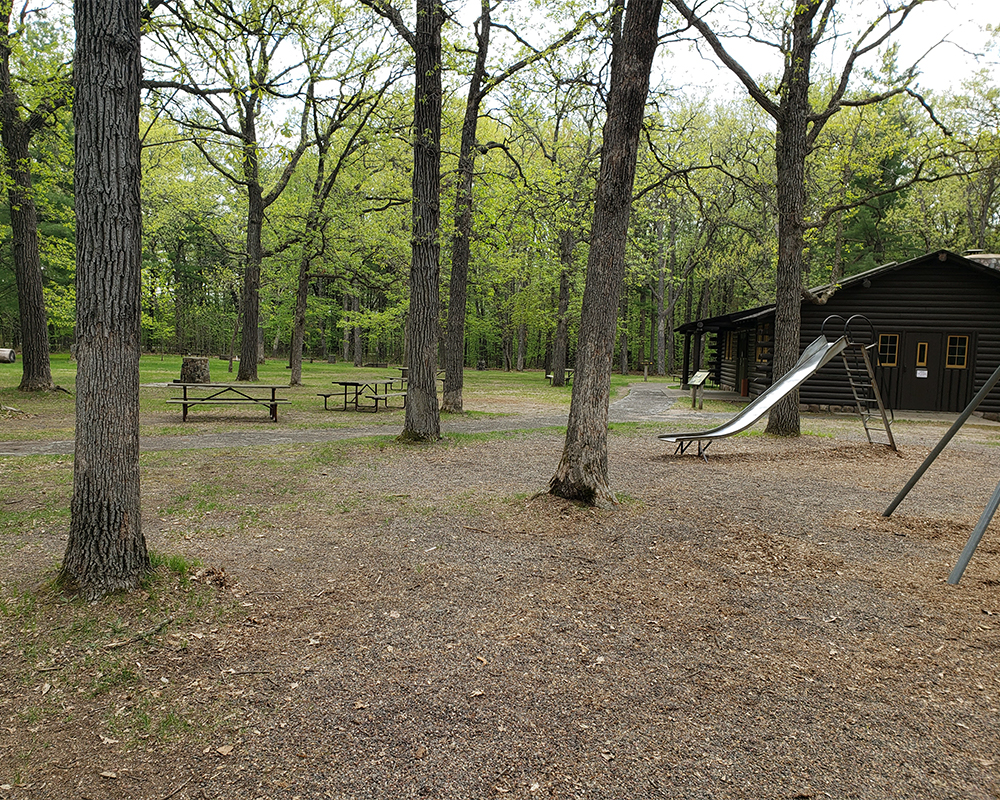 Picnic grounds with some playground equipment.

Forested hiking trails follow the picturesque Pike Creek as it meanders through the park on its way to the Mississippi River. Visitors can rent a canoe or kayak from the park to explore this creek and river. In addition to this main area of the park, the Little Elk unit lies 3.5 miles north where the Elk River joins the Mississippi. This unit was added in 2003 and is rich in archeological resources. Visitors can enjoy hiking a roughly 1.5-mile loop trail.

The park was established in 1931, when 110 acres were donated to the state by the famous aviator, who at the time was considered a national hero for being the first to make a nonstop solo flight across the Atlantic Ocean. Later, however, he espoused horrendous, white supremacist beliefs and associated with leaders of the Nazi party. Some of this history is on display at the nearby museum and former home of Lindbergh, which is operated by the Minnesota Historical Society.

Saving the mouth of Pike Creek 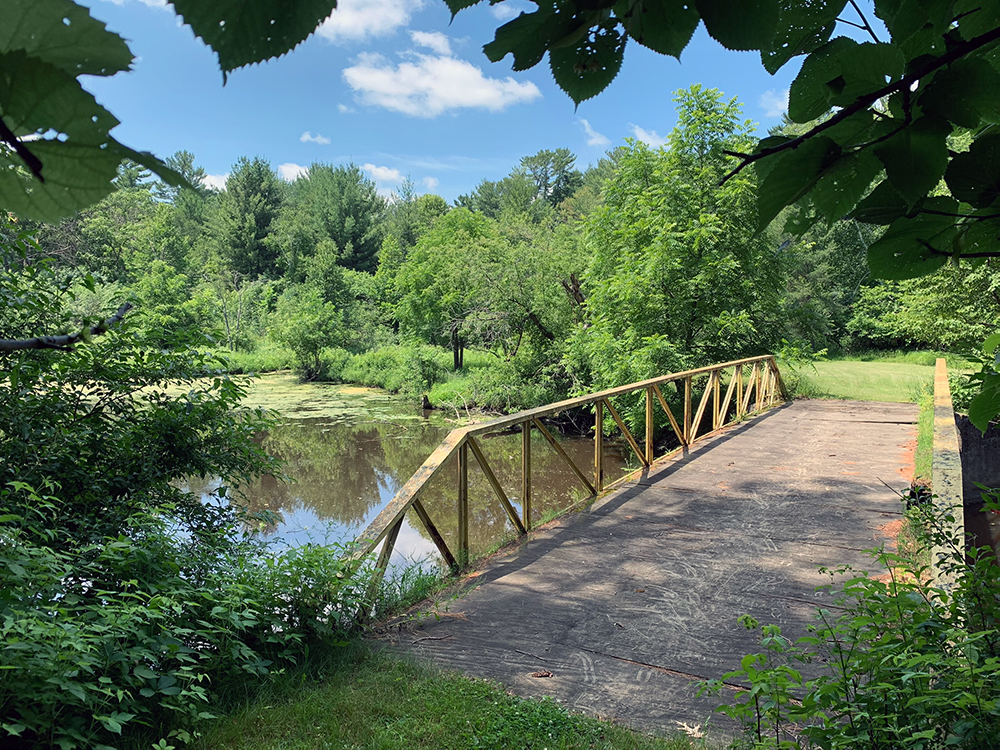 A footbridge over Pike Creek will likely be brought up to accessibility standards for park visitors. 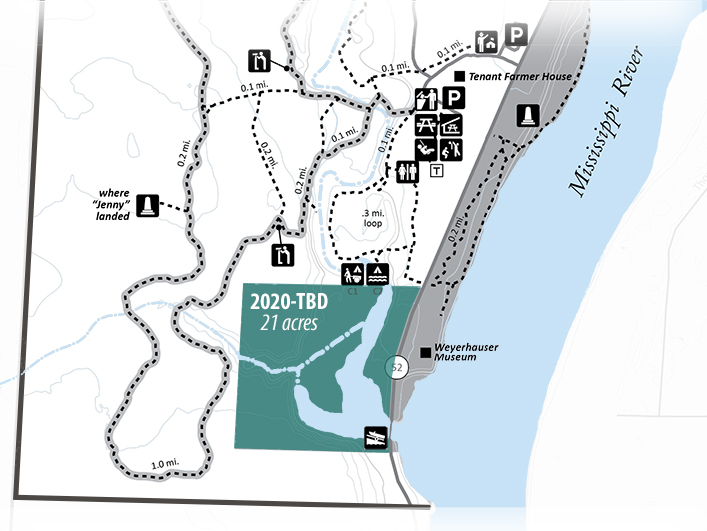 Home before its removed to restore natural condition of land. 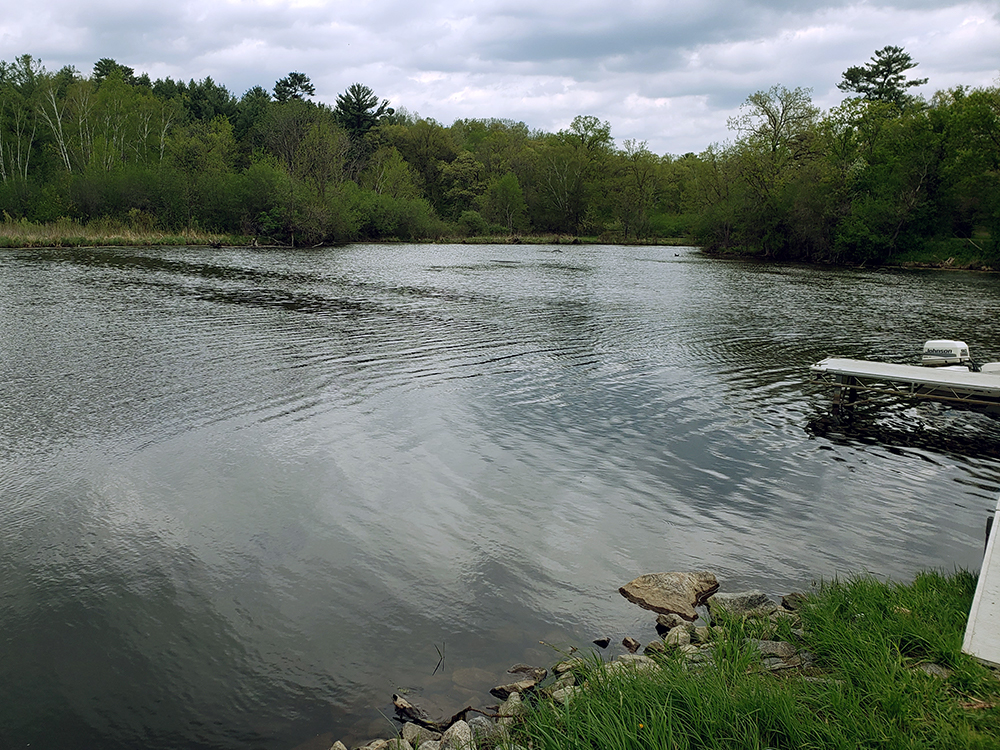 Looking at land project from the public water access Pike Creek empties into the Mississippi River at the bridge. Lawn with creek in distance.

Where Gretchen the Lion once roared, park visitors will soon stroll

Notched into a prime area for Charles A. Lindbergh State Park is a property that has been part of the Smuda family story for three generations, starting in the early 1900s. It occupies a critical place at the mouth of Pike Creek–a major water feature in the park. The creek widens and meanders here, blending into wetlands before passing under a bridge along Highway 52 and draining into the Mississippi River.

In 1999, the Smuda property was officially designated within the park’s statutory boundary, meaning it could be purchased if the owner wanted to sell. But, at that time it was still serving as the home for Alvina Smuda, and would continue as such for another 21 years. Finally, in 2020 the former park manager, Ron Jones, upon learning that Smuda was contemplating moving, enlisted P&TC’s assistance.

“This property is the most critical natural resource-based inholding remaining in the statutory park boundaries,” he explained. On Sept. 9, 2020 P&TC finalized the sale and plans to hold the land in trust while the MnDNR secures the necessary funding.

The modest house, situated along Highway 52 is surrounded by mown lawn to the north, which comes to an abrupt edge against the park’s forest. Behind the house, a collection of old sheds and barns dot the landscape and a foot bridge crosses the creek, whose shoreline and wetlands sprawl out in a relatively natural state. All these buildings will eventually be removed once the park takes ownership and begins to restore the entire property to a natural condition. The foot bridge will likely be brought up to accessibility standards and integrated into the park trail system.

Smuda, 87, now lives in the nearby town of Little Falls and says she is happy the land will become part of the park. “I can go visit and maybe start another zoo,” she joked.

The county had previously purchased a small parcel from Smuda where they’ve built a public boat launch. Boats can be launched into the creek and pass under the highway bridge into the Mississippi River. A water trail on the Mississippi promotes canoeists and kayakers to paddle up the creek to a campsite in the park. According to Park Supervisor Barry Osborne, the landscape around the mouth of the creek offer interesting elevations and with this addition, park trails could be moved closer in toward the creek to offer nice views.

We had to act quickly when we learned that the Institute for Minnesota Archeology (IMA), an organization that had worked for 16 years to develop the Little Elk Heritage Preserve, an area rich in archeaological resources dating back thousands of years, was having financial trouble and about to lose this important place.

The Preserve was located about 3.5 miles north of Charles A. Lindbergh State Park. After lengthy planning and facilitation by P&TC, it was officially added to the park.

Today, the area contains a couple miles of looped hiking trail that allow visitors to see and learn about such archaeological sites as a 1700s French fur-trading post, an 1800s Ojibwe Mission and a settlement called Elk City to name a few. This 2-acre parcel of oak woodlands was offered as a donation by the landowners to the MnDNR. However, it couldn’t be accepted until park boundaries were legislatively expanded. The MnDNR approached Parks & Trails Council for help in acquiring and holding the land while the legislative process was completed, which happened two years later.