From Friends of Lashbrook Park

After meeting informally in the summer of 2008, in February, 2009 the Friends of Lashbrook Park elected its first officers: President Gloria Kiester, Vice-President Helen Lashbrook Olson, Secretary Ann Ness, and Treasurer Lola Fick. Lloyd Harkness was named groundskeeper and began his commitment to pulling weeds, removing volunteer trees, and keeping the park beautiful, a responsibility he welcomed, remembering his childhood, living near the Lashbrooks and walking to Longfellow school with Helen Lashbrook. When Lloyd died in 2017, Kenneth Kirton, an experienced naturalist, succeeded him.

The Board also adopted a mission statement:

The Friends of Lashbrook Park shall preserve, maintain, and enhance Lashbrook Park as a
natural, passive park for all people in all seasons to enjoy nature and refresh their souls.

In April, 2009, The Friends of Lashbrook Park finalized its affiliation with the Parks & Trails Council of Minnesota. 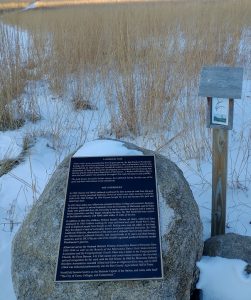 This land for a passive park was purchased in 1991 by donations from the City of Northfield, St. Olaf College, and Northfield residents with the assistance of funds from the Minnesota Department of Trade and Economic Development in cooperation with the National Park Service and the United States Department of the Interior.

J. Wesley and Kathiann Brown were the local leaders who generated the support that made this park possible.

In 1903 Ulysses and Della Lashbrook purchased the farm to the west across the road from this park as well as 20 purebred Holsteins, 11 of which were under contract to provide milk to St. Olaf College. In 1916 Ulysses bought the land which became this park and raised hay there.

In 1915 their eldest son Alfred, who attended Carleton College and received a Bachelor of Science degree in animal husbandry from the University of Minnesota, married Edna Stake, who graduated from the University’s teacher education program with a major in home economics, and in 1916 they took over the farm. With four children and St. Olaf students working for room and board, they raised corn, oats, and alfalfa on this land and developed a herd of purebred registered Holsteins that became nationally known. By 1950 Lashbrook cows had stocked herds in 23 states and three foreign countries. Lashbrook Pearl Ormsby made history through her son Woodmaster and his record setting offspring. By 2012 fifty per cent of the 362,000 cattle registered in the Holstein breed carried Woodmaster’s genetics.

Alfred served on the National Holstein Friesian Association Board of Directors from 1938-1946 as well as on the Minnesota Dairy Herd Improvement Association Board and boards for the Northfield schools, Farmers Cooperative Elevator, Farm Bureau, and Congregational Church. Edna was a leader in the Congregational Church, in the Farm Bureau, in 4-H Club nature and conversation projects, and received national recognition for her work with the Girl Scouts. In 1963 the Minnesota Holstein Breeders Association awarded Al and Edna an engraved silver tray for their service, and in 2013 Al was inducted posthumously into the Rice County Agricultural Hall of Fame.

This park honors the Lashbrooks, their care of the earth and their commitment to the community. Northfield remembers the Holsteins by calling itself the city of Cows, Colleges, and Contentment.