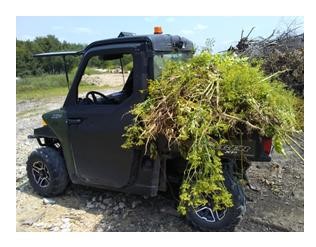 From Friends of Chester Woods

There is a never-ending battle going on in Olmsted County Parks to limit the spread of invasive plants. This effort is under the direction of park staff with the help of the Friends of Chester Woods (FOCW) and other volunteers. The focus currently is on removal of garlic mustard, wild parsnip, spotted knapweed, buckthorn, and honeysuckle, particularly in areas frequented by park visitors. A variety of approaches are used at different calendar times including burning, chemical spraying, mowing, pulling of plants, and hand and mechanical cutting of woody plants. Due to park staffing limitations, much of the effort is performed by volunteers year round. FOCW has pledged $6,000 for invasive control over the next 5 years. 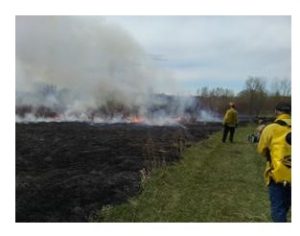 This past spring, the staff, with help from volunteers, was able to burn a significant number of park prairies and some wooded areas to set back the development of invasives. The conditions of moisture, wind, temperature, and plant development came together to make for several successful burn sessions. Many non-native plants are stunted by burning while most native plants thrive natural burn cycles. It may be possible to have additional burn sessions later this fall.

Several areas were mowed to set back buckthorn, honeysuckle, and dogwood early in the year, and some prairies were mowed in the summer to reduce the wild parsnip in large areas that cannot be handled by hand spraying or pulling. Early spring found volunteers spraying garlic mustard followed by hand pulling when blooming began. Students from Byron Schools also helped pull as well. The plants are bagged for later burning. The Park also had an invasive weed control day where staff and volunteers used hand sprayers in the park’s developed areas to reduce wild parsnip. This was followed up by volunteers continuing to spray and then pull plants well into the summer. Seed heads were bagged for later burning. 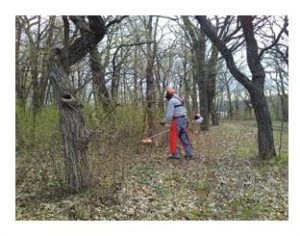 Hand cutting and chemical treatment of buckthorn and honeysuckle is done throughout the year, including over the winter. A primary focus area this past year was to restore the woodland at the dam overlook and then clear buckthorn along the trail to the overlook. This project is being done by FOCW members and other volunteers, with funding provided by Parks & Trails Council of Minnesota. Some work sessions were set up for scouting groups to help as well.

Check out a video about these efforts!

Chester Woods Park is always looking for volunteers to help with invasive weed control as well as other park activities. If you are interested in volunteering, there is a link on the Olmsted County web page to submit a form to be a volunteer.