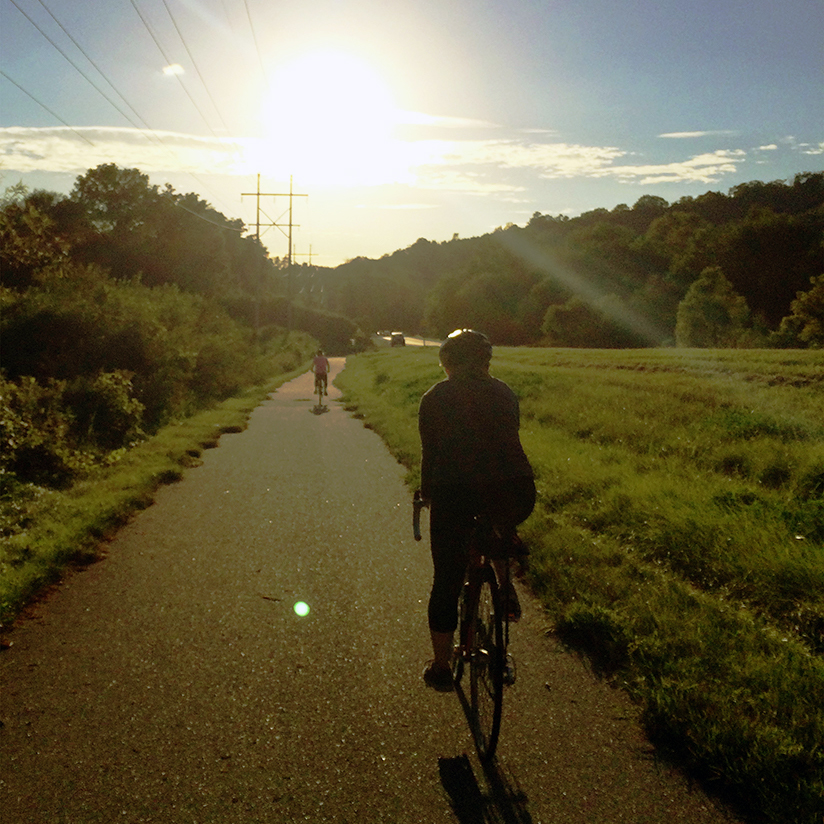 Bicycling on the trail. 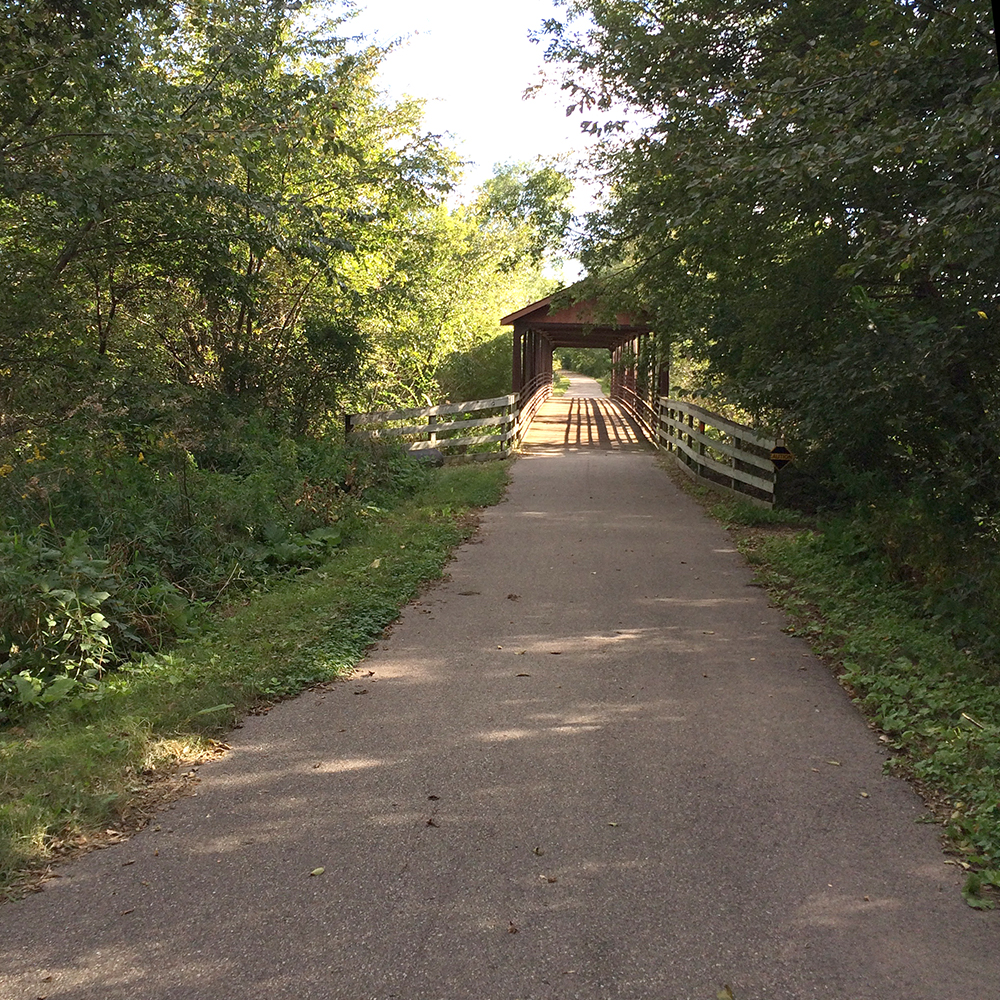 One of the bridges along the trail. 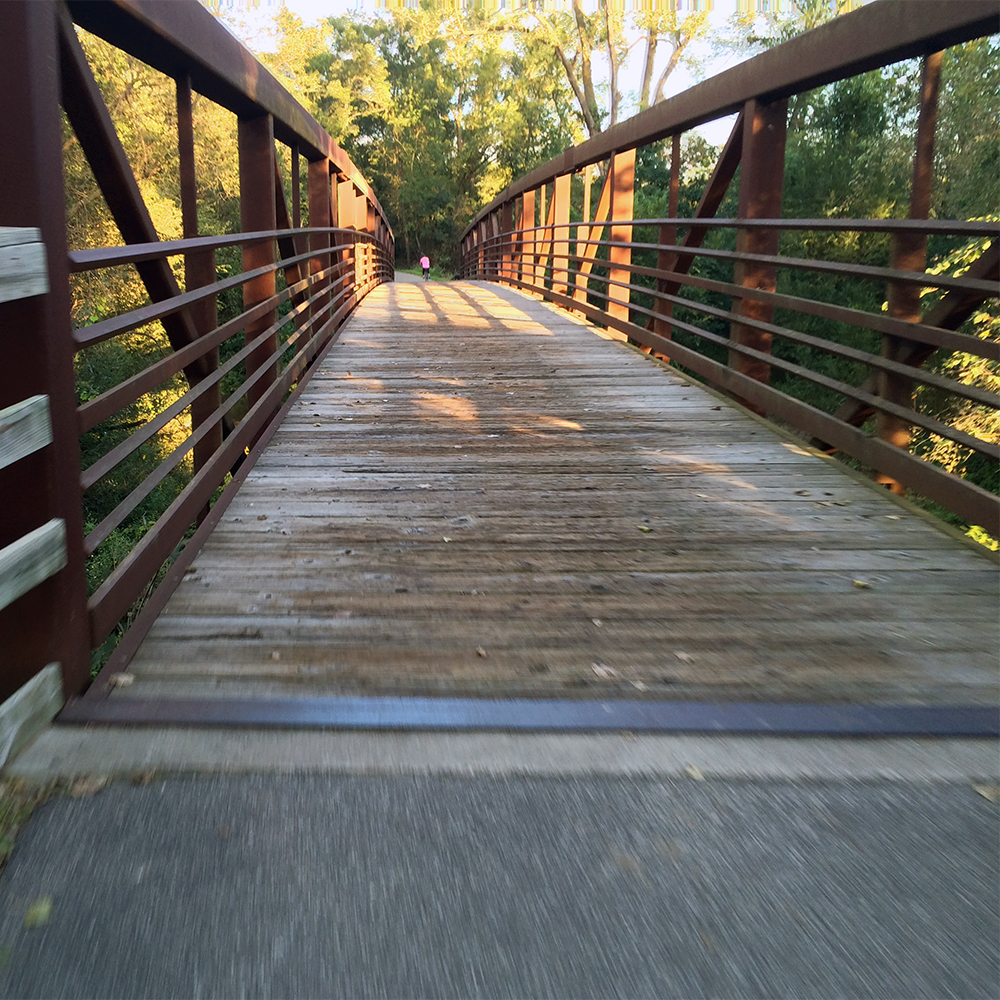 One of the bridges along the trail.

Currently, this trail exists in two unconnected segments, each less than six miles long. The northern segment does, however, connect seamlessly to the 19-mile Cannon Valley Trail via a short city trail connection in Red Wing. Meanwhile, the southern segment is anchored in the city of Zumbrota at the Covered Bridge Park, home to an historic covered bridge.

When complete, these two segments will be joined together and the trail will extend for 47 miles with Red Wing in the north and Pine Island in the south. It will pass through several other small cities in between. It will also serve as a link in the chain to connect the Cannon Valley Trail and Douglas State Trail.

This trail passes through a scenic mix of tall grass prairies, maple and basswood forests, and oak savanna. Deer, fox, wild turkeys, beavers, pheasant, eagles and opossum can often be seen from the trail.

The trail is paved and used by bicyclists, hikers, in-line skaters, wheelchair users and snowmobilers. There’s an adjacent natural surface treadway for horseback riders in the area around the Hay Creek Unit of a State Forest.

when last project
was completed

LOCATION: Outside Zumbrota at 180th Ave

This project involved securing an easement (legal permission to use land for a trail) through farmland from where the trail terminated at 180th Ave, through to other easements owned by the DNR for the trail.

As of August 2021, this segment has not yet been developed.

Land to extend the trail along bluff

LOCATION: at trail terminus in city of Hay Creek

Anyone who has traveled the northern segment of the Goodhue Pioneer State Trail may have been curious why it comes to an abrupt stop at a dirt road. Across the road, a logical continuation is visible in the overgrown corridor marked with a private property sign.

What you wouldn’t have known is that beyond this one parcel, sits four miles of abandoned railroad land owned by the DNR for the purpose of extending the trail. That’s the challenge with trails—one small parcel of privately owned land can stop all progress.

Parks & Trails Council first attempted to buy this parcel for the trail about a decade ago. At that time, the property encompassed 134 acres, which was much more than what was needed for the trail. Unable to come to an agreement with the owner, it looked as if this land would be lost to the trail for good.

Hope returned early this year as we learned that this parcel had been subdivided and what remained unsold was the 61-acre parcel needed for the trail.
In March, P&TC bought the land and we will now hold it in trust while the DNR secures public funds to buy it for the trail.

Roxanne Bartsh, who has been volunteering with the Goodhue Pioneer Trail Association for about 25 years, has learned that building trails takes patience. “I just had trust that it would happen eventually…you got to stay optimistic,” she said. “And now I’m so grateful that Parks & Trails Council did it–this wouldn’t have happened without them.”

The property includes portions of Hay Creek, a waterway that is considered one of the best trout streams in close proximity to the Twin Cities Metro, according to the DNR Division of Fisheries. Over the years, the DNR has actively worked to improve the habitat along Hay Creek with projects including erosion control and native plantings.

Through this property, the trail corridor runs along the base of a bluff with exposed rock outcrops, making for some scenic views for the planned trail extension. It’s an area well suited for wildlife thanks to the diverse landscape that also includes mature hardwood forest and former cropland.

This is some of the most beautiful trail in southern Minnesota, according to Bartsh, who says her “group will now do all we can to make this trail development a priority for the DNR.”