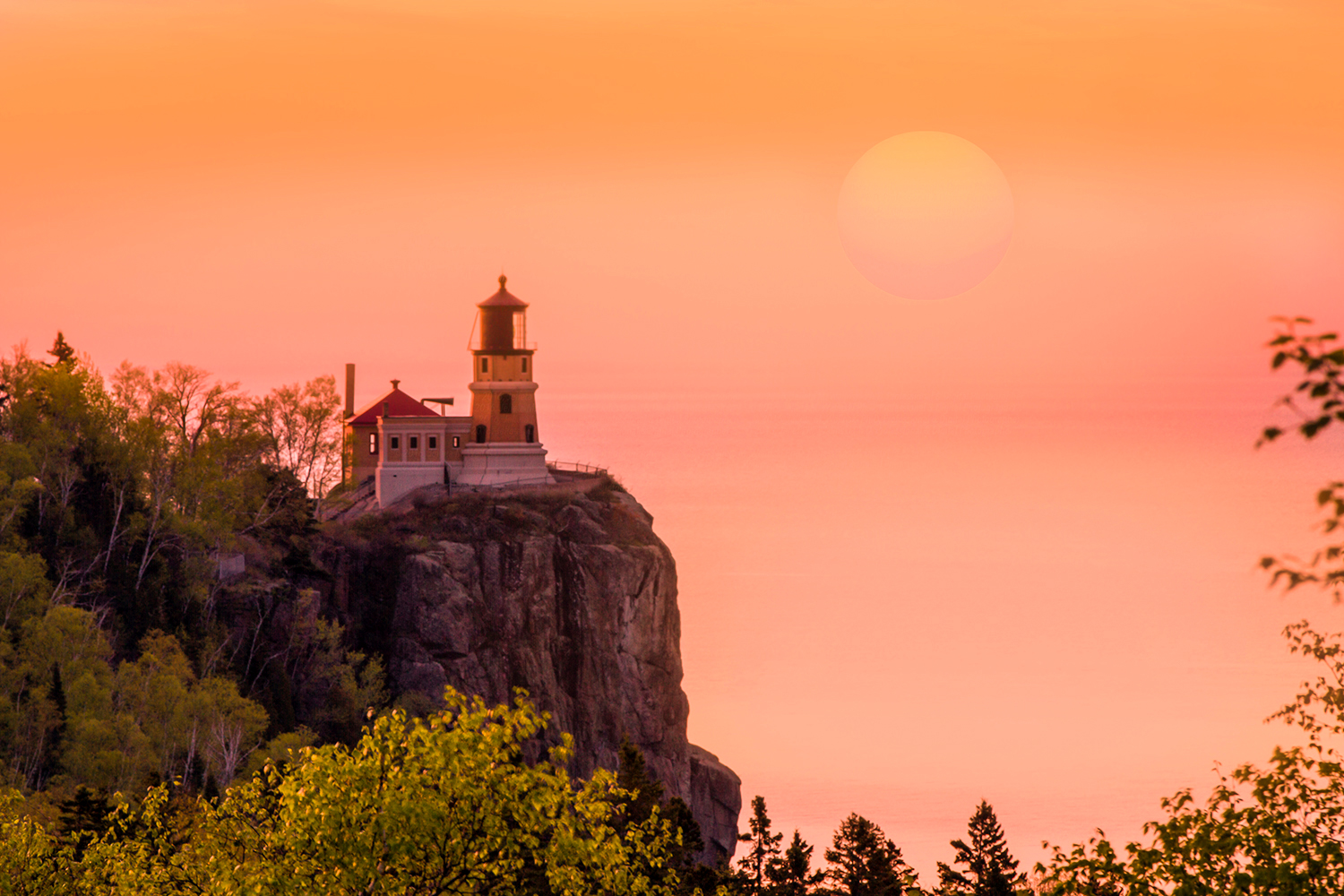 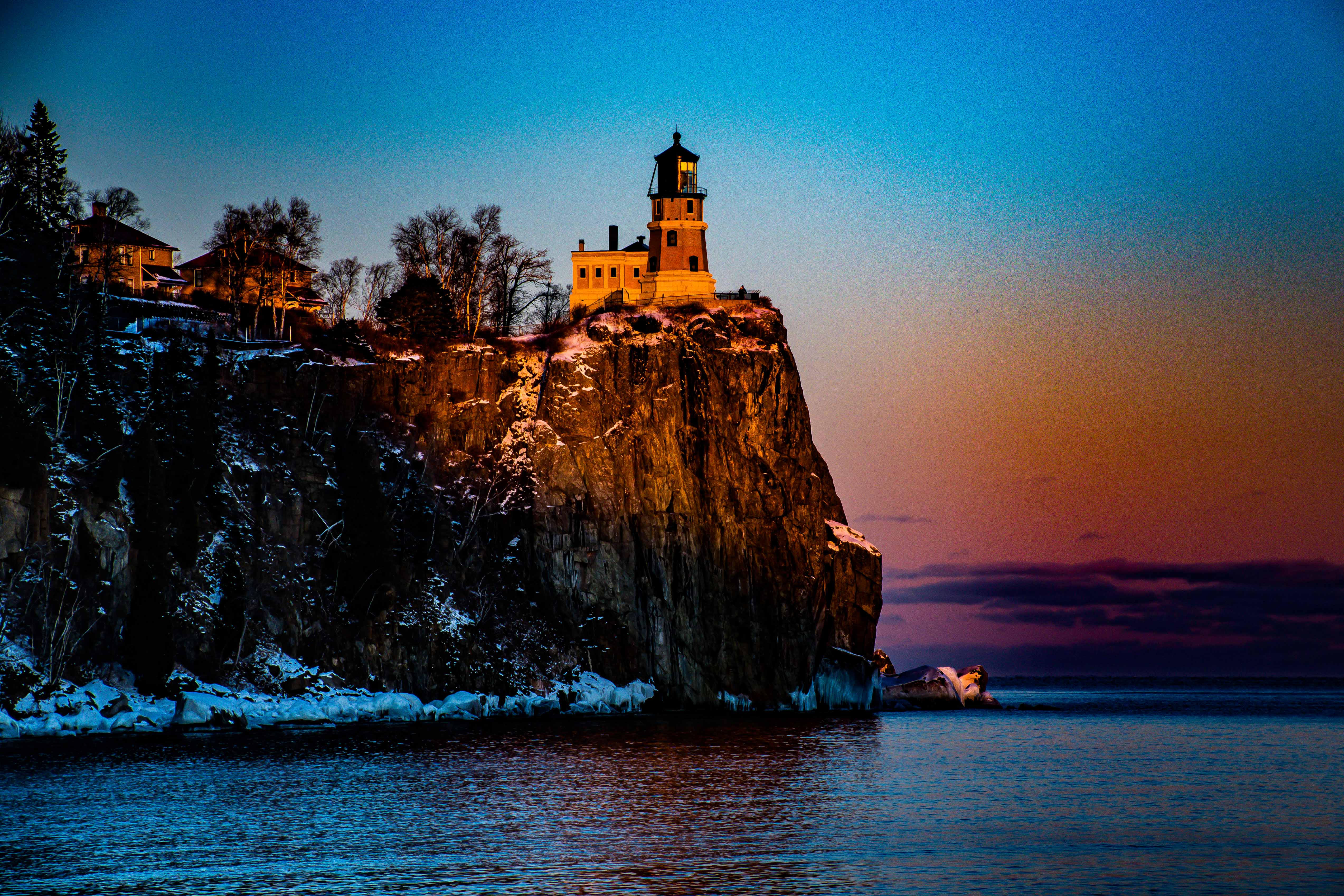 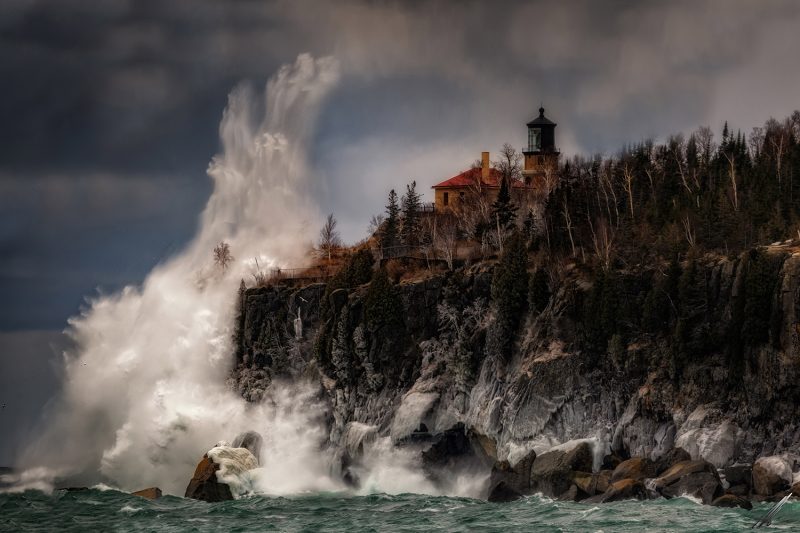 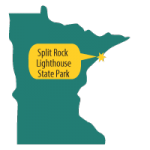 Most Minnesotans are familiar with the historic lighthouse perched atop the rocky cliff overlooking Lake Superior, seeing as it is often included in top lists of lighthouses in the nation. Yet, there is so much more to explore in this state park, including 12 miles of scenic hiking trails and 8.7 miles of fat tire bike trails. The paved Gitchi-Gami State Trail also runs through the park and can be ridden from here to Goosebery State Park in the south or north to Beaver Bay.

Pebble Beach, located near the picnic area is a unique beach where pebbles—smooth, fist-sized, basalt pebbles that clink together—take the place of the sand that you’d find at a typical beach. 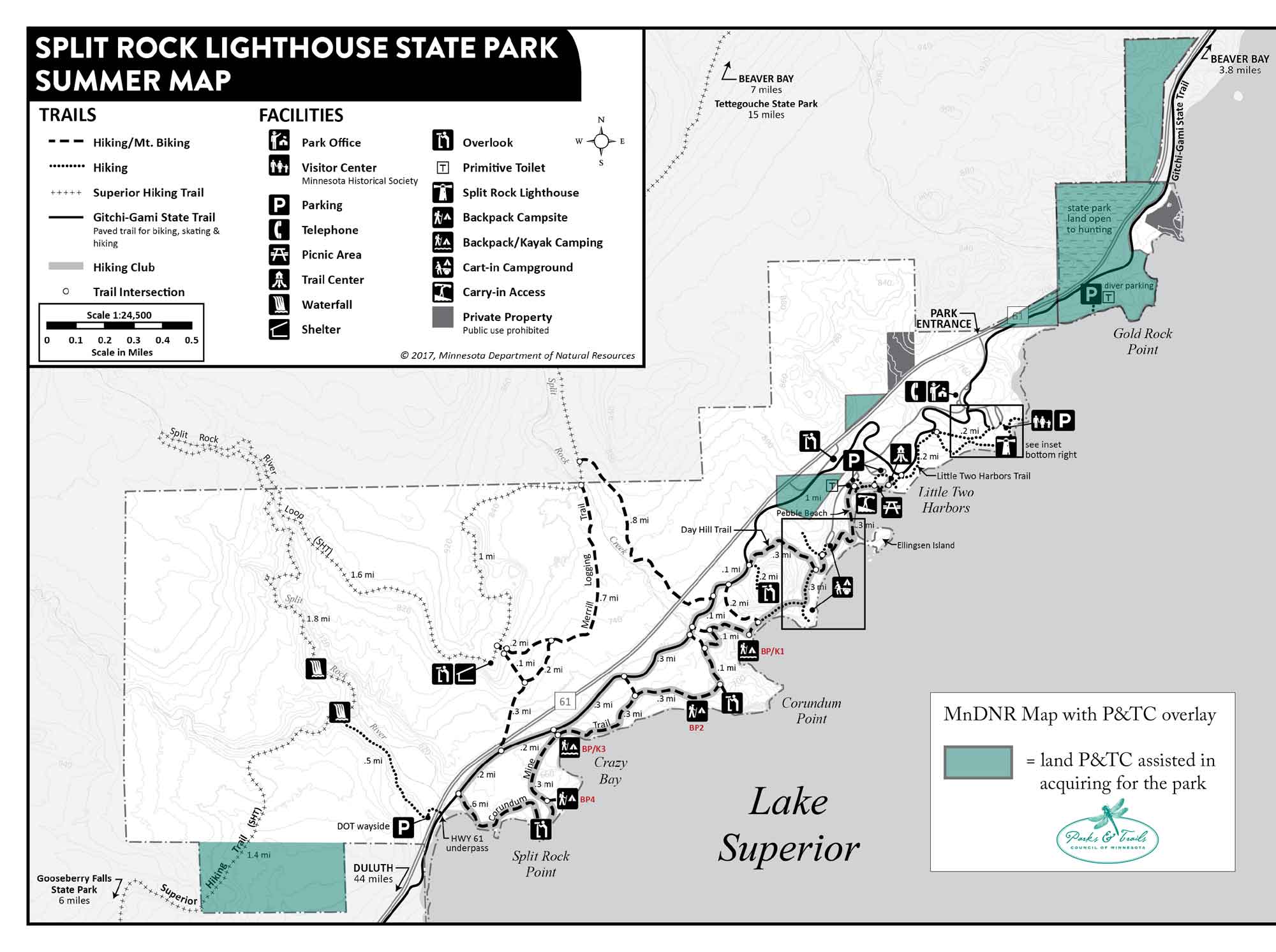 Protecting the forested land for the foot trail 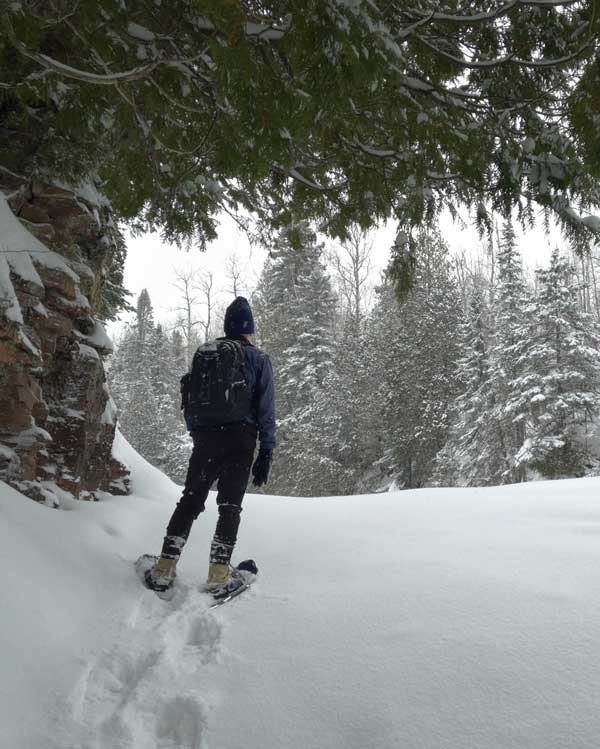 In 1945 Judge C. R. Magney, who would go on to be a founder of Parks & Trails Council, noticed a sign near the Baptism River reading “Lake and River Frontages for Sale.” Needing no further incentive, he went to work protecting this land by successfully lobbying for the creation of Split Rock Lighthouse Wayside. Initially just 35 acres, it wasn’t until 1967 that the legislature authorized its expansion to 1,872 acres and changed the designation to a state park.

Building on this history, in 1992 Parks & Trails Council acquired 120 acres for the park’s southern border where the Superior Hiking Trail traverses. This project was part of a much larger project where we acquired an additional 840 acres just outside the border of Split Rock Lighthouse, from the same landowner. Years later the 840 acres were exchanged with Lake County for land they owned in George H. Crosby Manitou State Park (see that park for details). 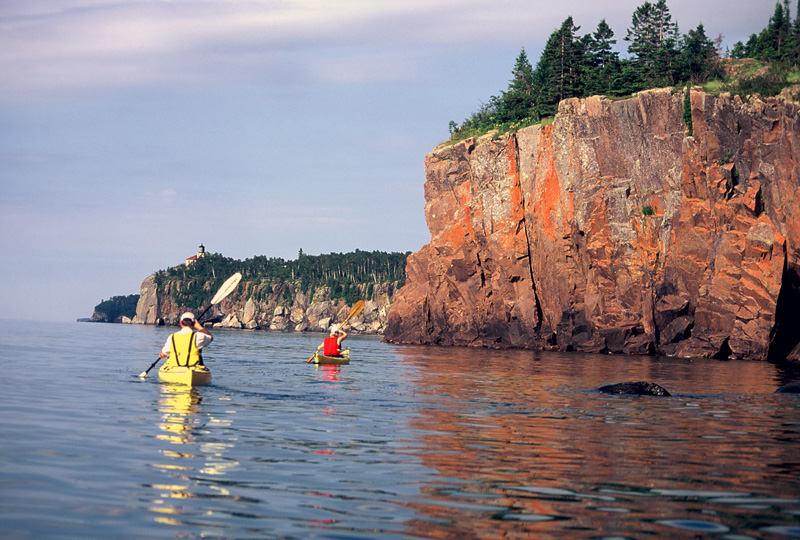 Kayakers next to Gold Rock Point

Today, many people know Gold Rock Point as that rugged, lichen-covered rocky cliff they see when looking up the shore from the Lighthouse. It is a staple in the iconic North Shore experience as it’s its largest granite exposure on the shore. It is also the primary access point for underwater divers to access the famous shipwreck of the Madeira.

In 1997 this land was privately owned was all almost lost as the family that owned it wanted to sell. The owners first offered it to the Parks & Trails Council of Minnesota for $1.06 million. If the Parks & Trails Council didn’t agree to the deal, Gold Rock Point was going to be put up for sale on the open market. A prime piece of real estate, Gold Rock Point instantly captured the hearts and minds of land conservationists, divers and private developers alike.

With one of Minnesota’s most special places potentially going to the highest bidder, we moved swiftly to purchase an option to buy the 81-acre golden-orange gem with its 3,700 feet of shoreline and spectacular views to ensure it remained forever publicly accessible. We immediately launched a drive to raise the $1 million needed to purchase the land while simultaneously working to convince the Minnesota Legislature to expand the boundaries of the adjacent Split Rock Lighthouse State Park to include Gold Rock Point. At the same time, we began mobilizing public support to persuade the Lake County Board of Commissioners to approve the sale.

Thanks to these efforts, which included many dedicated individuals and foundations that contributed to the fundraising campaign, Gold Rock Point is today part of Split Rock Lighthouse State Park, a place where countless generations will be able to experience all of its diverse magnificence.

A ridgeline view over Lake Superior

Located on the northern border of the park, this 44-acre parcel encompasses a ridgeline with stunning views to Lake Superior. The effort to save this land gained added urgency when our then-president Nadine Blacklock was killed in a car accident near the property in 1998. This tragedy occurred while we were in the midst of negotiations. Memorials poured in to fund this acquisition that Ms. Blacklock was dedicated to seeing happen. Meanwhile the Blacklock Nature Sanctuary and the Minnesota Land Trust worked to acquire the adjacent 85 acres in her memory.

The purchase was completed in 1999 with the landowners agreeing to sell significantly below its market value because they wanted to ensure it’s protection in a natural state of beauty. They essentially donated $465,000 worth of value toward this project. By 2003 we successfully lobbied to expand the park boundary and conveyed the parcel to the DNR.

The one-half mile lakeshore parcel purchased by the Blacklock Nature Sanctuary was used to build a cabin as part of its artist-in-residency program. Today this cabin is rented out by Cove Point Lodge.

Connecting the two ends of the park’s shoreline

This 5.3 acre property divided the state park as the last remaining private shoreline between Gold Rock Point and the lighthouse. The property had been developed with four cottages in about 1937, nearly ten years before Split Rock Lighthouse was designated as a wayside, most likely with the intent of operating a resort. However, for the 20 years prior to this project’s initiation it had been used as a single-family residence.

It was a critical link to provide for contiguous parkland and the owner was looking to sell. This was a time of surging development in residential properties for the area. Seeing how critical this land was for the park and how narrow of an opportunity this presented for finally incorporating it into the park, we began discussions with the owner to acquire the land.

The project required coordinating the removal of the cottages to a private property nearby. The Gitchi Gami State Trail was later built traversing this property as well as the the Gold Rock Point property we helped acquire for the park a few years earlier.

From kitsch to state park overlook 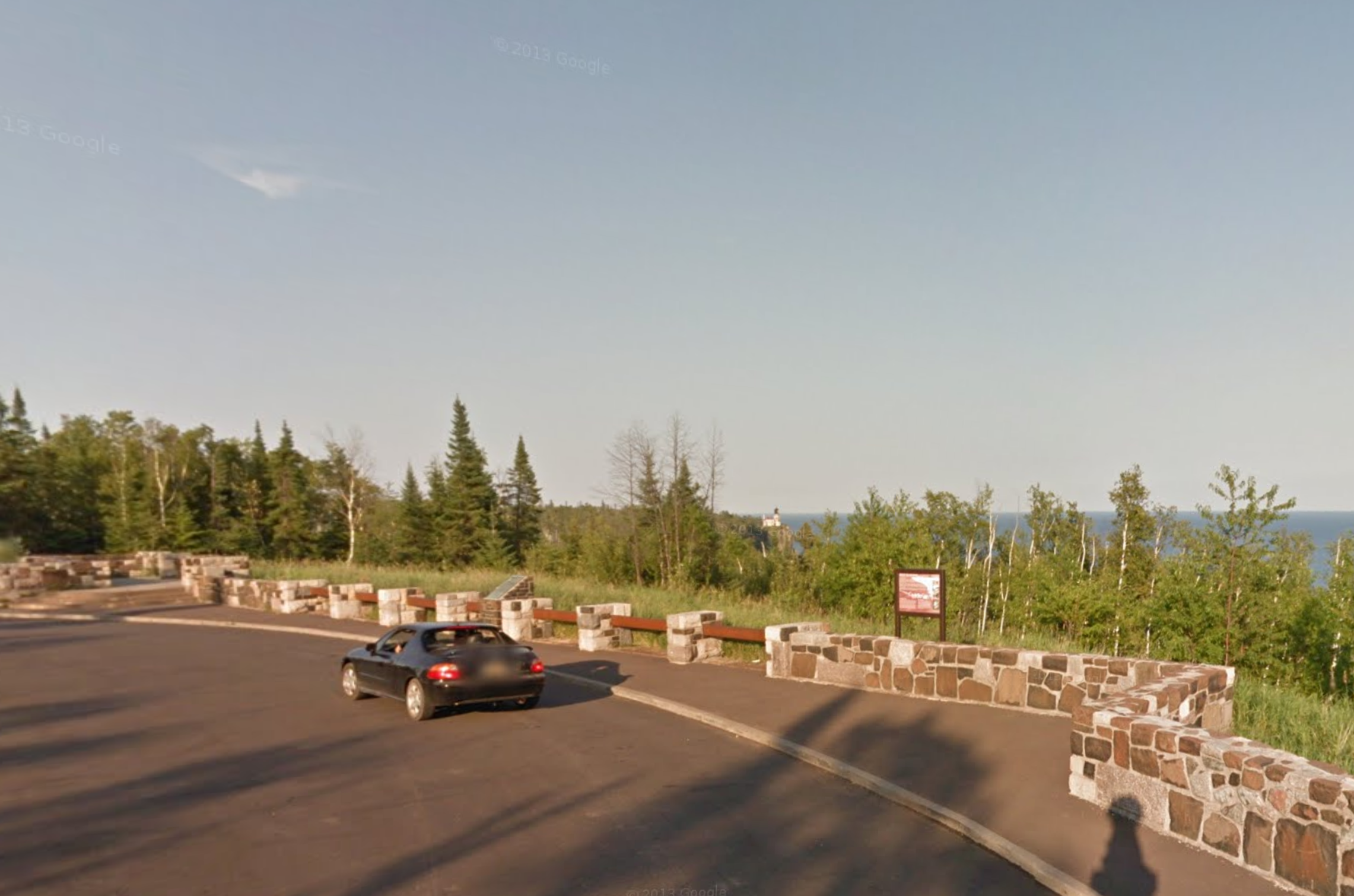 Highway overlook with lighthouse in the distance

In the middle of Split Rock Lighthouse State Park was a privately owned, kitschy tourist attraction called the Split Rock Trading Post. Once a popular stopover located right on highway 61, many a tourist paid the dime admittance charge to climb the wooden tower and see an unobstructed view of the lighthouse.

By 2010 that history was but a memory as a fire claimed the shop a decade earlier and was never reopened. With the planned re-alignment of the highway the owners sold the property to Parks & Trails Council and we immediately conveyed it to the state park. Today the former parking lot has been turned into a wayside overlook for drivers along the highway to see that same spectacular sight those tourists used to pay for.

In conjunction with this project the landowner had a small 4.7-acre undeveloped property a quarter-mile up the road. We acquired and conveyed this at the same time.